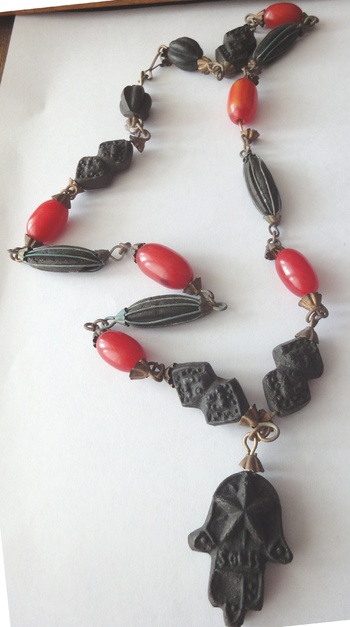 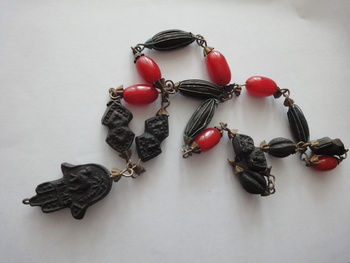 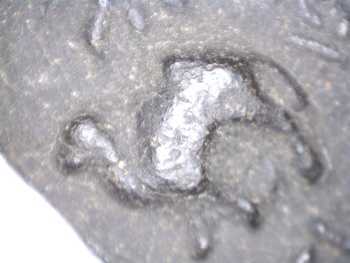 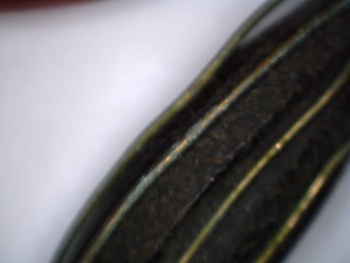 Who can tell me about this chain?
What I can tell you is the following. At the bottom, it is a black / dark brown pendant with one on one side and one camel and on the other hand the word Sousse a town in Tunisia (North Africa) It has the form of a so-called hand of Fatima, or Hamsa. (The Hamsa is a palm-shaped amulet popular throughout the Middle East and North Africa, and commonly used in jewelry and wall hangings. Depicting the open right hand, an image recognized and used as a sign of protection in many times throughout history, the hamsa is believed by Jews and Muslims and others to provide defense against the evil eye. It has been theorized that its origins lie in Ancient Egypt or Carthage (modern-day Tunisia) and may have been associated with the goddess Tanit).
I do not know where these dark beads are made. They look like Vulcanite. The red beads are made of Bakelite (tested with Simichrome. And the links are from copper considering the copper-green impact on some beads.
Who has any idea of which these dark beads and pieces are made of.