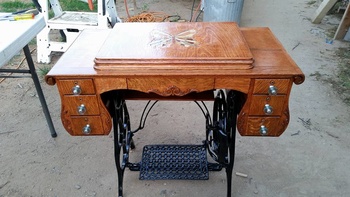 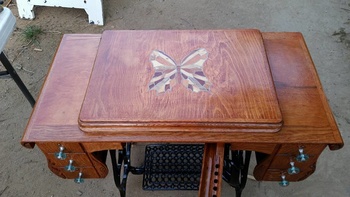 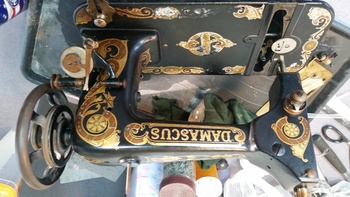 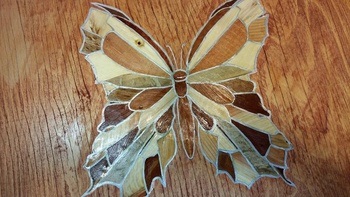 I found this 1920's Damascus treadle sewing machine at a Goodwill in Las Vegas. I paid a total of 5 dollars for it! When I started cleaning up the cabinet, I saw that the top veneer was bubbled. I began to gently lift it so that I could re-glue it, but saw the dread black mold. I ended up stripping off the entire veneer on top and cleaned MOST of the black mold off, but even using industrial cleaners, I still had one area in the center where it was deep into the fibers. I carved it out because recreating the top was beyond my skill set with the intricate chain lift latch design, so the other option was to carve out the damaged area. I downloaded a stained-glass pattern and used pallet wood to create a wood inlay of various scrap woods that I carved by hand using hand tools and a dremel as well as a scroll saw for the major cuts. I glued it together, then fitted it into the top. The "silver" is done with silver foil paint, and then I sealed the entire top because the 2ndary wood was actually quite attractive. I did EXTENSIVE repairs on the cabinet, and although the pictures of the machine aren't impressive (they're the as-received condition), it was complete with over 20 different feet and other accessories, 5 bobbins, and the bullet bobbin holder. It's a great little machine, and I'm pleased with the 5 bucks spent.