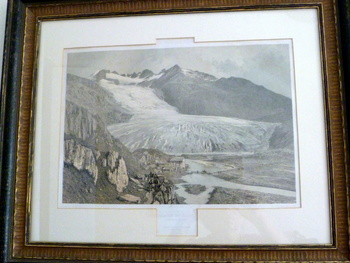 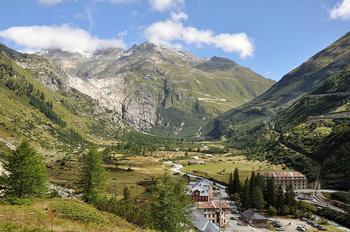 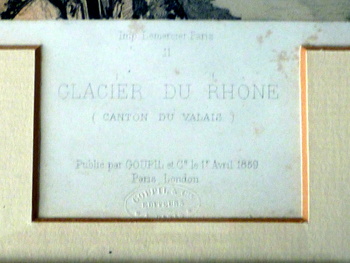 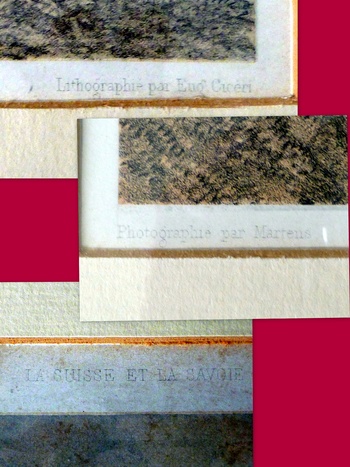 In 1983, at a church rummage sale in Calgary, Alberta, I purchased a Lithograph (approximately 15"x 18") called "Glacier Du Rhone".
It was done by Eugene Ciceri from photograph by Frederic Martens. The lithograph was published by Goupil on April 15, 1859 Paris, London.

From the enclosed photographs you can see that today, there is no glacier.

Since 1983, I learned that:
Eugène Cicéri was born on 27 January 1813 Paris and died on 20 April 1890 (At 77 years old) Bourron-Marlotte
His birth name was Etienne Eugène Cicéri. He was activity painter , engraver , illustrator
He is the last son and the pupil of the painter and scenographer Pierre-Luc-Charles Cicéri , and the grandson of the painter Jean-Baptiste Isabey. His mother is the sister of the painter Eugène Isabey .
He received his first teaching from his father, as well as his uncle Eugene Isabey. Eugene Cicéri was then influenced by the Barbizon School . He worked on the landscape at Fontainebleau and his surroundings, he was one of the first artists installed in Marlotte (now Bourron-Marlotte ), a village where he settled in 1849. He exhibited for the first time at the Salon de Paris in 1851 . The following year, his View taken at the edge of the Loing is worth to him a medal of second class.
A painter and watercolorist, he sacrificed "passenger artists" to fashion and published collections of lithographs according to his drawings, which showed a more realistic concern than his romantic predecessors, using the new medium of photography As documentation. He traveled in the Alps and the Pyrenees ( The Pyrenees drawn after nature and lithographed , Switzerland and Savoy). He participated in the illustrations of the great collections of Baron Taylor and Charles Nodier , the picturesque and romantic Journeys in ancient France , especially with views of Brittany .

Frédéric Martens or Friedrich von Martens, was born in Venice on December 16 , 1806 and died in Paris on 12 January 1885 (to 78 years). He was a writer and photographer, one of the pioneers of photography in Italy and in France , where he came to live and work until his death.
Like many artists (engravers, draughtsmen, painters) of the time, Frederic Martens was interested in 1840 in the new development of photography , first through thedaguerreotype , then the first negatives to the collodion . At the London World Exposition in 1851 he presented a panoramic drawing of Mont Blanc made from fourteen photographic prints.
In 1845 he developed a room with a 150-degree opening for panoramic shots . It thus delivers daguerreotypes of the Seine, taken from the workshop of Lereboursplace du Pont nine, nearly 40 cm long and incredibly fine. In 1855 he claimed to have discovered the process of collodion albumin together with Jean-Marie Taupenot .
It also marks the history of photography by making the famous prints of the twenty-nine photographs chosen by Jean-Charles Langlois and Léon-Eugène Méhédin on their return from the Crimean War . The painter Langlois, accompanied by the young photographer pupil of Le Gray , had been commissioned to assemble the necessary elements for a panorama on the siege of Sevastopol in 1855 . Martens is then a specialist in panoramic shooting and photographer of the Emperor's cabinet. His prints were given to Marshal Pelissier , General - in - Chief of the Army of the Orient , and to the Emperor Napoleon III .
Appointed Knight of the Legion of Honor on October 29, 1855
Frédéric Martens is the author of numerous engravings from the drawings and paintings of Charles Mozin , while his photographs served as a model for lithographs like Eugène Cicéri . (Switzerland and Savoy editorAdolphe Goupil )