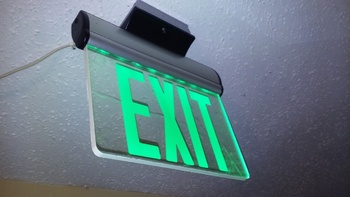 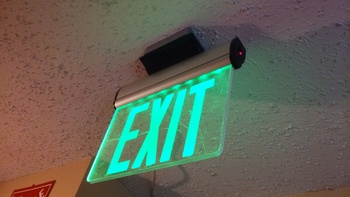 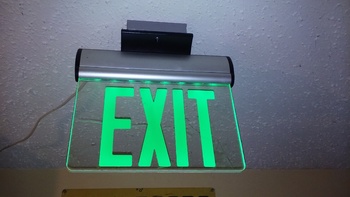 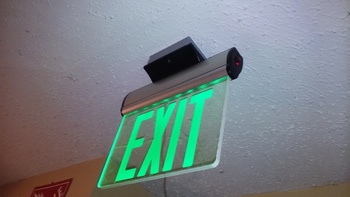 Here's another of my EXIT lights, in a general 'style' which has been popular since the 1950's-60's with its edgelit clear plastic sign blade design. This example isn't too terribly old (possibly still in current production?) it being actually lit by LED's and still having its fully functional 'battery backup' hardware inside its top portion, which means it still will remain lit for roughly 4hrs without AC power. (I know this because it is pictured as it currently exists hanging from my own kitchen ceiling over the door, and the power here has gone out for that long or longer once or twice since I put it there...)

I'd guess it was pulled from somebody's office building renovation a few yrs ago, I scored it from my local Habitat for Humanity RE-STORE. There are mfr's labels inside showing its particulars but I don't remember the details offhand, and can't locate the .pdf file of its spec sheet I found online shortly after I got it, probably stuck in an older computer than this one...? <sigh>