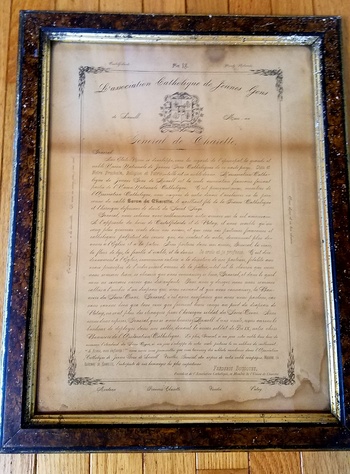 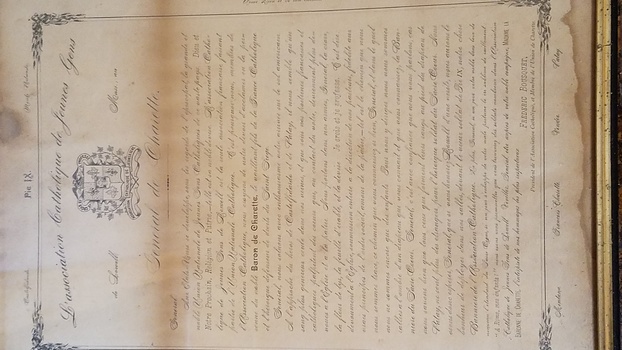 I picked up this old French document from Lowell, Massachusetts, but had no idea what it even said until I used Google translate. It appears to be a letter to General Francois de Charette, who served in the French Royal Navy during the American Revolutionary War. What I'm wondering is, how old is this? Charette died in 1796, but there are multiple mentions of Pope Pious IX, who didn't become Pope until decades after Charette's death. But, why invite Charette to Lowell after his death?

Here is the translation:

In the United States, under the eyes of the episcopate, the great and noble National Union of Young Catholics of this vast country develops. God and Our Prochain, Religion and Homeland-that is his noble motto. The Lowell Catholic Youth Association is the only French association that is part of the National Catholic Union. That is why we, the members of the Catholic Association, are committed to our duty of acclaim in the person of the noble Baron de Charette, the valiant son of Catholic France and the hereditary of the Holy See.

General, we solouns with enthusiasm your arrival on the american soil. At the approach of the hero of Castelfidarde and Patay, it seems to us that a more generous blood flows in our veins, and that under our French and Catholic chests there are beating hearts which, in contact with yours, become more devoted to the " Church and country. We leave in our arms, General, the cross, the fleur-de-lys, the maple leaf, and the motto. I believe and I profess. That is to say, devotion to the Church, complete submission to the direction of our pastors, fidelity to the principles of social order, love of country, such is the way we have traced ourselves, this path you know So well, General, and in which we are enclosed only children. To lead us there we rallied to the amber of a flag that knows you and that you know, the Banner of the Sacred Heart. General, it is with confidence that we speak to you, for we know well that all those who form their ranks at the foot of the Patay flags are no longer aliens for the heroic soldier of the Sacre Coeur. We have hoped, General, that if you honor Lowell with a visit, we shall have the privilege of displaying in our rooms, in front of the old soldier of Pius IX, our beloved Banner of the Catholic Association. Moreover, General, if one day your noble arm again raises the standard of the Sacre Croeur, if one day escapes from your male chest the cry of sublime mocking: "In Rome, my children!" We dare to promise you that you will find many soldiers in Lowell's Catholic Young People's Association. Please, General, to be with your noble campaigne, Madame La Baronne de Charette, the interpreter of our most respectful homage.