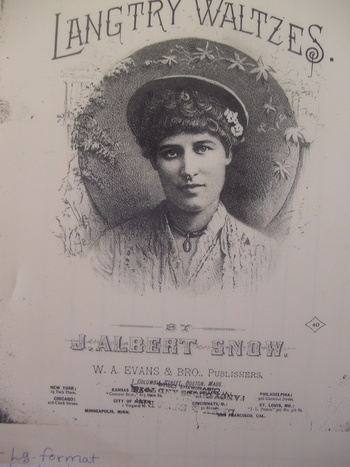 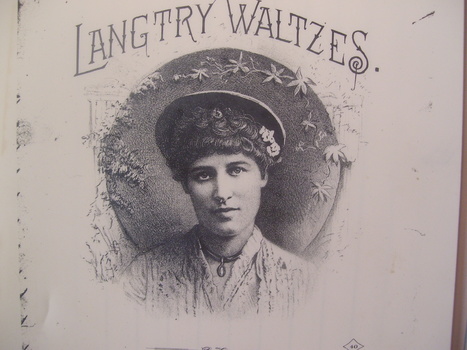 n Europe, her first name was usually spelled "Lillie". In America, it was usually "Lily."
Lily Langtry is most famous today as the object of "Hangin' Judge" Roy Bean's obsession!!. In court, those who had spoken kindly of her were often given leniency. Those who had disparaged her usually felt his wrath. He even hanged a few men who hadn't committed capital crimes.
When a town grew up around his court in western Val Verde County, Texas, he named it "Langtry" for her.
Because of this famous obsession, Lily Langtry is always mentioned, if not portrayed, in any book or movie in which Judge Bean is portrayed.
She was a famous entertainer, who once dropped a chunk of ice down the Prince Of Wales Shirt!!
Queen Victoria's youngest son, Prince Leopold, hung her portrait over his bed. The Queen was not amused and personally removed the offending art work!
Artists John Everett Millais, Edward Poynter, George Frederic Watts, Edward Burne-Jones and-- James McNeill Whistler--- painted her portrait.
Oscar Wilde dedicated his poem "To Helen Formerly of Troy, Now of London" to her and wrote the play "Lady Windemere's Fan" for her.

This sheet was found in a bound album of old sheet music that had edges trimmed to fit the leather album cover when bound. In olden days one piled up the music they loved and took it to a bookbinder and he had standard covers in sizes and chose one that fit the sheets which were cut, but many retained the graphics 'cause the sheets were large, If this had an artist signature, it may have been cut off. I recall it had the words on a label now gone that said" ferro" on it. Could that indicate "ferrotype"?