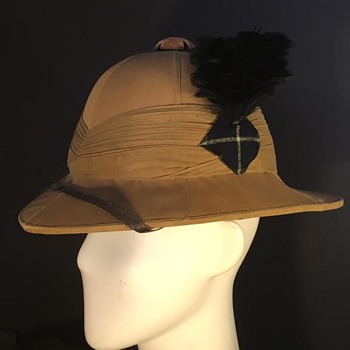 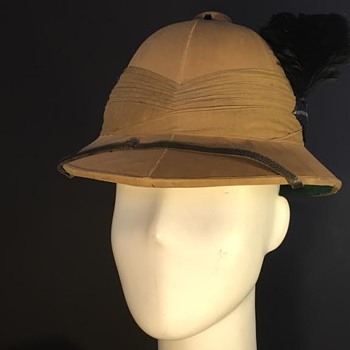 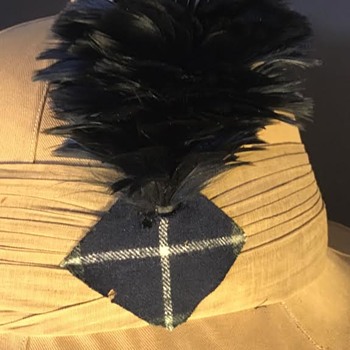 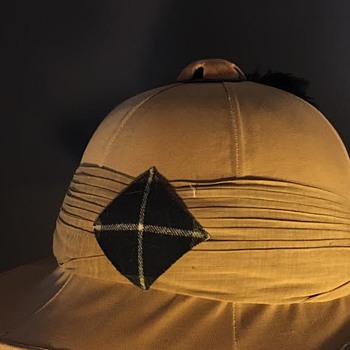 This is a very nice WWI period Wolseley Sun helmet attributed to an Officer who served in the Scottish Rifles.

The sun helmet is in great condition for being over 100 years old. The pagri is in fantastic condition, all the folds good. The sun helmet has a black chinstrap (black for rifle regiments) which looks very nice on the sun helmet. The chinstrap in unfortunately detached on one side near the top but because the cut is near the top I still manage to tuck the end in to appear as though it is complete on the sun helmet. Other than the cut the chinstrap is in good condition, no other places of distress. To each side of the sun helmet are cloth diamond flashes. The diamond flashes has on it the Douglas Tartan, the tartan that was used by the Cameronians (Scottish Rifles). To one side, above the tartan flash and tucked into the pagri is a beautiful black feather plume. The black plume helps to make it one of the most beautiful sun helmets that I've seen.

The interior of the sun helmet is in good shape for it's age, with only minor service wear.

The sun helmet is in overall fantastic condition especially given it's age, it is over 100 years old. The helmet also came with it's original carrying tin with the name of the Officer and his regiment. It also came with another chain chin strap which resides in the tin for now. I've seen historical pictures of these type of Scottish Rifles Sun helmets being worn with the flashes and the plume, but this is the only one I've come across so this is a rare piece.

The helmet is attributed to Second Lieutenant John Patrick Bibby of the Scottish Rifles. This Wolseley Sun Helmet would have been purchased when he was stationed in Malta in early 1914, just prior to WWI. Unfortinately for this Officer, in the coming war he would make the ultimate sacrifice. This is some research I had done by a professional WWI British Soldier researcher, I have added a few things to the story but most of it was done professionally. I have already posted this on another site but I'd like to share it here also, because it is the only named object to a KIA (Killed in Action) I have. Here is his story...

John Patrick Bibby was born in Hambledon, Hampshire on the 9th November 1892, his birth registered at Droxford in the fourth quarter of that year. He was the second eldest son of Colonel Alfred Bibby (formerly 4th Hussars) and Hylda Bibby. He appears as an eight-year-old on the 1901 census living at Bordean House, Langrish, Petersfield. Colonel Bibby, who had retired from the army by 1901 was, at 54 years old, twenty-two years older than his wife. He was also quite comfortably well-off and employed ten servants. John's brother Francis Stephen Bibby, four years younger than him, also appears on this census return and like John he would also lose his life serving with the Cameronians in the First World War.

By 1911, John was at school at Eton and appears on the census as an 18-year-old schoolboy. He joined the school cadet contingent and was subsequently commissioned on the 1st April 1912 as a second lieutenant with the 3rd Battalion, Scottish Rifles. This battalion was a part-time, home-based battalion only and eighteen months later, on the 10th December 1913, he opted for a full-time career in the military joining the Scottish Rifles with a regular commission.

John Bibby served at home until the 23rd January 1914, embarking for Malta the following day. I believe that shortly before he embarked for Malta he would have purchased this Wolseley. This Wolseley sun helmet shown above would have been worn by him in Malta. He was still serving in Malta when Britain went to war in August 1914, the battalion stationed at St Andrew's Barracks.

On the 15th September 1914 the battalion set sail for Southampton and on arrival went into camp at Baddesley Common near Romsey. The battalion subsequently moved to Hursley Pary, Winchester and joined the 23rd Brigade in the 8th Division.

On the 4th November the battalion was back in Southampton, setting sail on the SS Cornishman and arriving in France the following day.

2nd Lt. Bibby would serve in France until his death on the 10th of March, 1915, at the Battle of Neuve Chapelle.

John Bibby was killed during the battalion's attack on Neuve Chapelle. In his history of the Cameronians, Colonel H H Story MC records that there was an eerie silence when the first waves went over at 8.05 but "then, with a sound as of a nest of giant hornets suddenly let loose, the air was filled with streams of lead from German machine guns and rifles." Soon, all officers had become casualties, with total casualties for the day recorded as 469 killed, wounded or missing. Thirteen officers, including John Bibby, were killed that day. Lieutenant Bibby made the ultimate sacrifice for King and Country.

2nd Lt. John Patrick Bibby was only 22 years old when he died, and his younger brother, Francis Stephen Bibby, was only 18. This Sun helmet, though not worn during WWI, was worn just prior to WWI by an Officer who served and died in the First World War.

It is a little strange having an item that he once wore on his head in Malta before and just very early on in WWI. This item is a really nice piece in overall great condition and I shall always keep it on display and in pristine condition as the original owner of this sun helmet made the ultimate sacrifice. I hope you have enjoyed this post, thank you for reading.