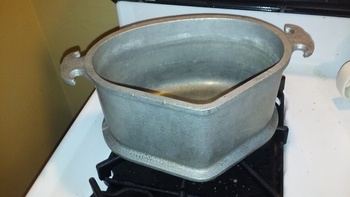 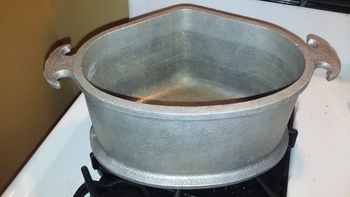 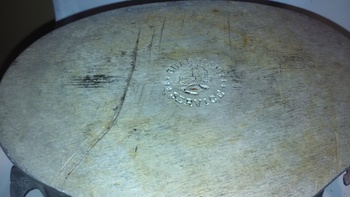 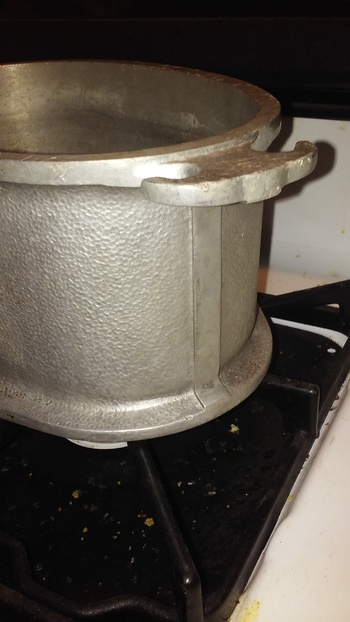 This was a likely 'right time-right place' prize from the thrift store over last weekend -- GUARDIAN SERVICE ware isn't often found in junk shops anymore ("antique shops", maybe?) and when it does show up doesn't tend to hang around very long -- it is easily recognizable and lots of folks already DO know what it is. I wouldn't guess this pot was sitting there more than an hour before I spotted and snatched it off the shelf without looking twice (or at its price tag) on my first pass down the aisle... ;-) :-)

GUARDIAN was high-end "waterless" aluminum cookware made roughly 1930's-1950's, and mostly sold via "home dinner parties" in a way similar to the marketing strategy of Tupperware plastic into the 1960's-70's.

This pot was part of one of their most unique if even also most common items, the (probably ironically named) "Economy Trio" -- a set designed so that *three* of these (with their kinda triangular shape, plus a matching 'trivet' platter and either aluminum or glass 'dome' lids) could be nested together, such that the efficient homemaker could prepare her entire dinner's worth of vegetables (etc) on a single stove burner at the same time. Or so went the sales pitch. ;-)

[history went on to prove that any single one was also a pretty awesome pot to cook stuff in even by itself, but anyways...]

This particular one is in pretty good typical 'used' condition...it wouldn't take too much scrubbing at all to have it shining mostly "like new". It now joins my existing collection of a couple boxfuls of assorted other GUARDIAN pieces, which was (most of) my Grandmother's set. It is actually probably my *4th* "trio" pot as such (oops...there's a math problem there...) though I don't think I yet have a single triangle *lid*... <groan>