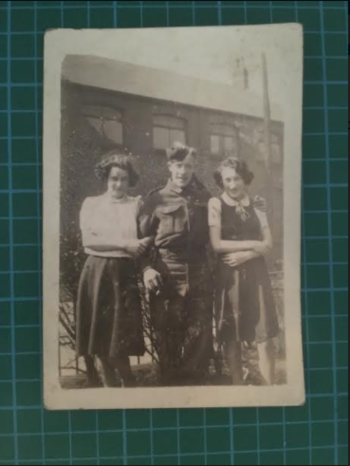 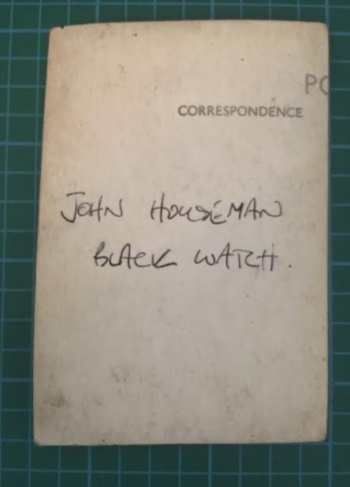 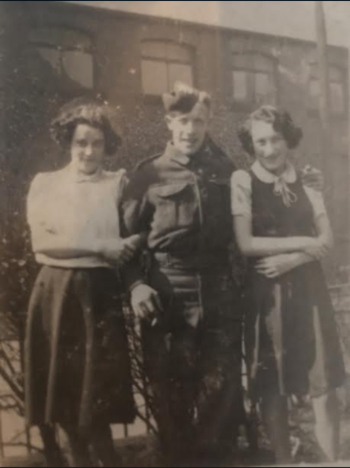 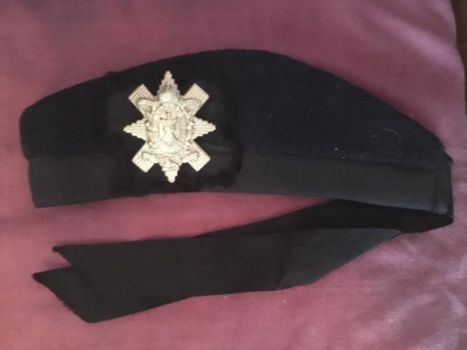 A very nice and original photograph that was part of a grouping attributed to one soldier who served in the Black Watch (Royal Highlanders) and Royal Scots during WWII.

The original post card photograph shows a soldier wearing his Battle Dress uniform and Glengarry Cap standing in between two young ladies, with a building as the backdrop. The said soldier is Private John Houseman, who I have done posts on before, and as stated above he served with the Black Watch (Royal Highlanders) and later the Royal Scots during WWII. I believe one of the girls is Private Houseman's sister who is mentioned in one of his documents after John Houseman's death prior to May 1973, but that is speculation. They could also be other relatives, friend(s), or perhaps one of them was even his sweetheart. As said before Private Houseman is in his military uniform and his wearing his distinctive piece of Scottish headgear, the glengarry. I am almost positive that the glengarry pictured is one that came with the grouping, the Glengarry can be seen last picture of this post, or in one of my previous posts that I did on the Glengarry specifically. The badge is unfortunately not attached to the glengarry, but I put it on top of where it would've originally been put into the glengarry for this picture. Pretty neat that I have an item that is probably pictured in this very picture.

Moving on, to the back of the photograph it says, "JOHN HOUSEMAN BLACK WATCH". I am not a photograph expert, and I originally thought this was just an old photograph and not an old real post card photograph, but seeing as it says on part of the back "Correspondence" and "PO-" with the rest of the letter cut off, I believe it was cut from a bigger sheet that would've said "Post Card" or something along those lines, I believe making it a Post Card photograph.

Private John Houseman was in the Black Watch from 1940-42 before serving with the Royal Scots thereafter until 1946, dating this photograph to circa 1940-42. I believe it may be early war, before he was sent off, but I know little of his service so hard to pinpoint a specific year.

I kindly ask that this photograph is not copied or reproduced, especially not without my permission, it is an original period post card photograph that is part of a grouping to a soldier that I bought for my collection.

I've already shown this photograph in previous posts on the Private John Houseman but thought I'd post this as it is a nice photograph of a soldier that served in the Black Watch and Royal Scots during WWII.

Thank you everyone for reading and I hope you have enjoyed this post.