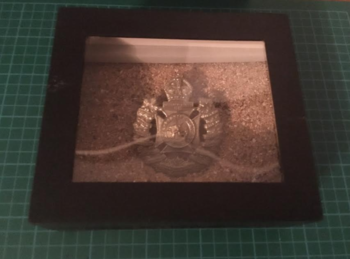 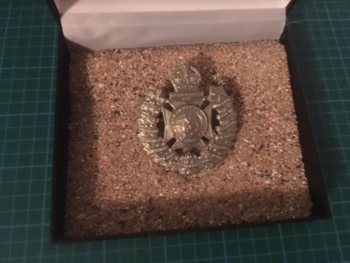 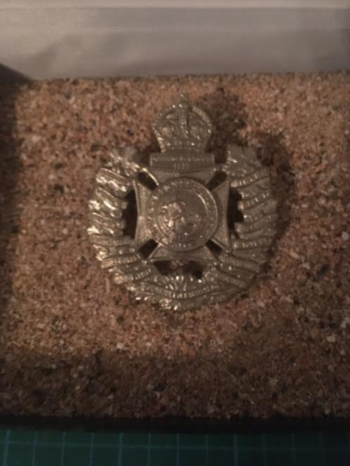 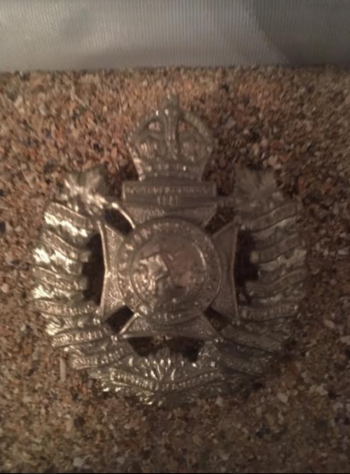 Here's something a little different than usual. A little display I made both as a tribute and for my own satisfaction. It's a very nice WWII Royal Winnipeg Rifles badge laying on sand in a small display case.

The cap badge is in good condition for it's age, to the back of it is good lugs. On the center of the badge is the Little Black Devil, the symbol of the Regiment. To the top of the badge is a crown, dating it likely to WWII period. All around the badge on the laurels are some of the various battle honours of the Regiment from the North-West Rebellion of 1885 to WWI.

But why the sand, you may wonder? The sand I bought on eBay, I'm on of those suckers that bought sand on the internet. It's sand from the location of Mike Beach, part of the greater Juno Beach, where the Canadians famously landed on D-Day alongside their British and American allies. Mike Beach ('Mike Red' and 'Mike Green' beaches, on the western edge of Courseulles) more specifically was the landing point of the Royal Winnipeg Rifles. The Royal Winnipeg Rifles among other regiments were crucial in taking the beaches and turning the tides of the War. This sand was apparently from that location so I thought i'd get a small portion and make a display like this, as a neat display and as a tribute to those from the Royal Winnipeg Rifles, other Regiments, and all soldiers on both sides that fell in what would be a major breakthrough and one of the true turning points in the War.

I thought this would be a neat idea and it looks pretty nice so maybe I'll make more neat "mini displays" in the future.

Thank you all for reading, hope you've enjoyed this post!