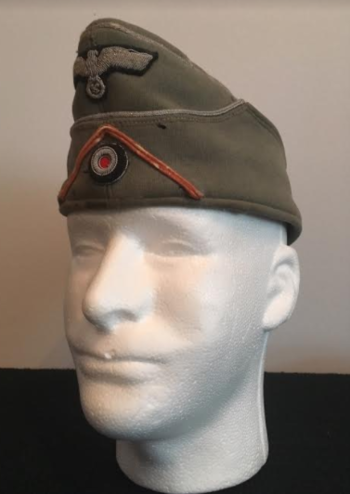 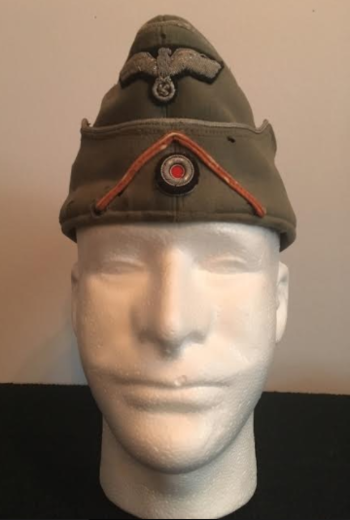 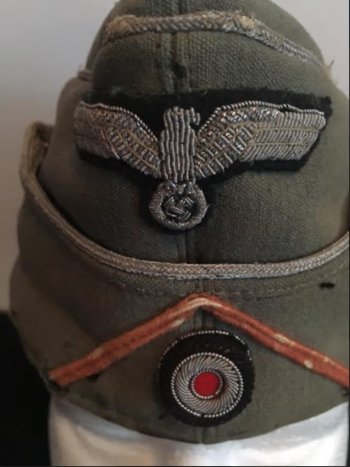 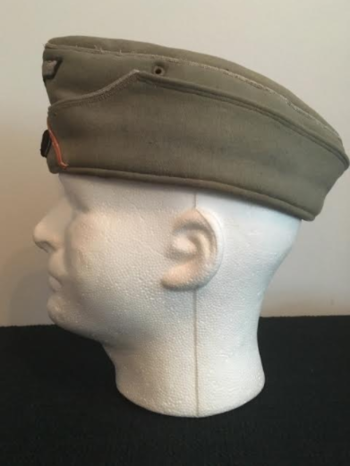 As some of my fellow collectors were posting some nice German WWII items and models, I thought I would join the "trend" and share my favorite German piece in my small German section of my collection to date.

A very nice WWII period German Panzer Officer's grey side cap. This Panzer side cap is in pretty condition but is quite worn. This cap is no doubt service worn, "been there, done that". This is my favorite piece of my German stuff, although I have very little German items, this was my first WWII German object in my collection and something I plan on keeping for a long, long time, it just has so much character. I believe this is a 1938 pattern overseas/side cap.

Beautiful silver officer piper, bullion Nazi eagle badge (slightly off center). Below that is a discoloured rayon waffenfarbe soutache, Panzer units used the colour pink to identify what branch they were, but this is not pink, not anymore at least. It is very discoloured due to its age and service, however if you peak under the soutache a bit you can see the original pink colour, which is really neat, identifying this to be a cap of a Panzer Officer.

Some staining and minor moth holes around the cap but overall looks worn in a nice way, almost stunning in my opinion.

Interior is worn but still pretty nice, not named or dated and no manufacture label but still a quality cap.

The Panzerkorps, the armoured corps of the Wehrmacht (also the SS, and even the Luftwaffe) were crucial to the Reich's early Blitzkrieg victories and would be very important until the bitter end.

Most of the Panzer Caps you see are black, that was the main colour used when in combat in the tanks, but Grey caps were also used, and this is a very nice example of a rare grey Panzer Officer's side cap. These caps as I said before were worn in combat by tank crews and while doing non-combat tasks.

I have no doubts of this cap's originality, out of all the items in my collection, this is one of the pieces that I can say has "been there, done that". This is a beautiful cap in my opinion and is the first of hopefully more German WWII headgear in the future.