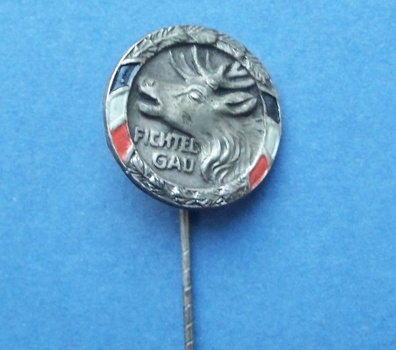 The Einwohnerwehr or Citizens Defense groups appeared in Germany after the November 1918 revolution making up a part of the Freikorps militia. They were established with the goal of defending Germany against Communist uprisings although the use of the old imperial colours on this badge go some way to suggest they didn't support the new Weimar government either.

Presumably they consisted mainly of civilians, rather than ex-soldiers like the regular Freikorps units.

This stickpin is for the Einwohnerwehr of the Fichtel region of Bavaria where Wikipedia tells me one of the first Nazis Ernst Röhm was a notable commander at the time.