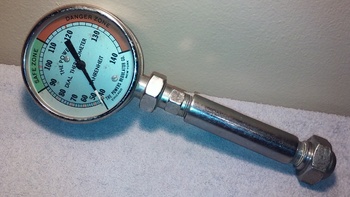 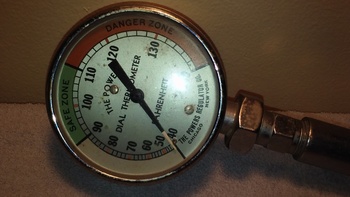 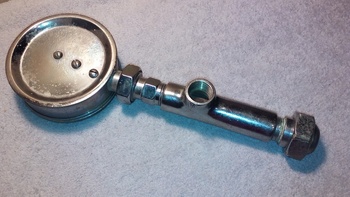 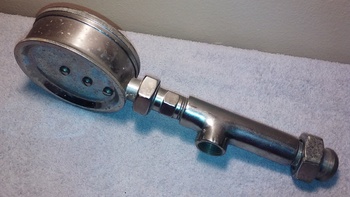 Most folks likely wouldn't have a clue what this thermometer was probably once part of -- but I'm pretty sure I recognized it immediately (numerous years ago now) when I spotted it on a local junk store shelf. Its color coded temperature range legend is the key (well, also that I found it here in this state, but...) corresponding perfectly to what would be considered optimum "bathwater temperature"... ;-)

Hot Springs (National Park) Arkansas is, as the name might suggest, a place on Planet Earth where roughly 140degree 'mineral water' otherwise bubbles up/out of the generally also very lovely kinda mountainous landscape all over town -- and always has done so. The town has its own delightfully amusing history as such (Al Capone apparently liked to hang (hide?) out there in the 1920's when he wasn't otherwise running the City of Chicago, etc. etc.?) and was, back closer to then, known as "America's First Resort".

The hot mineral water from the springs is piped all over the place, including "Bathhouse Row" on Central Avenue which is exactly what its name suggests -- a line of gorgeous old buildings which were first built to serve as public "bathing" facilities, to allow their patrons to enjoy the "restorative therapy" of the waters. From then until now, people have continued to come to Hot Springs to "take the baths" -- believing in the therapeutic (or at least just purely enjoyable?) 'restorative properties' of what'd now be mostly considered 'spa treatments'.

ANYWAYS...I don't know exactly what (probably?) "hotel spa" this thermometer might have come from, (ifn's it even exists anymore?) but I'd think it rather unlikely that it came from any of the original Bathhouse Row buildings -- it just doesn't look quite 1920's vintage to me. (a few decades later maybe...??)

EDIT -- I must have been tired last nite when writing this post, as I just realized I kinda left out one rather important detail to explain the function of this item. In case the implication isn't clear, thermometers like this are used as part of the "plumbing" attached to the (absolutely ginormous old porcelain) tubs (etc), to allow the attendants to draw comfortable feeling baths for their patrons. As the actual temperature of the 'raw' spring water is uncomfortably (if not scaldingly) hot naturally, it must be diluted with pre-cooled water before either the patron or the attendant can proceed with the bath process.