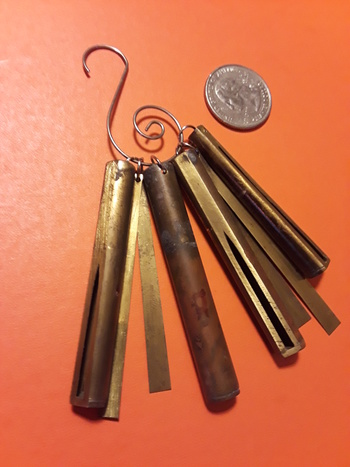 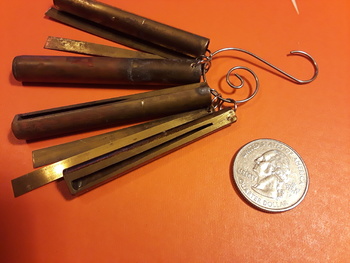 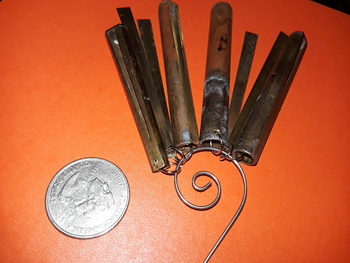 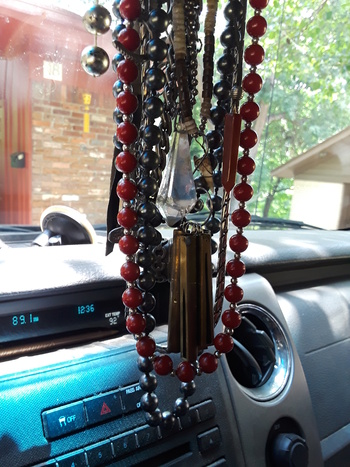 This is the result of a moment of inspiration/creativity at Ye Olde Organ Shoppe (my job) the other day, after I was informed that a small drawer-ful of old pipes were officially "junk", to otherwise be smashed/melted down one of these days whenever I feel like 'playing with fire and liquid metal'... ;-) :-)

BECAUSE, after all (last pic) I *obviously* was in desperate need of just one (or 8) more little kinda-shiny clinky-clacky things dangling from my rearview mirror...?? <lol>

These (8) small brass pieces are, in actuality, the 'sound producing' portion of four individual organ pipes, of the type referred to as "reeds" in the trade -- unlike the majority of organ pipes which are essentially very specially made whistles without moving parts, "reed pipes" contain these little bits within their bases which function together in nearly the same exact fashion as the reed/mouthpiece of an orchestral clarinet or saxophone. "Reed pipes" indeed usually produce sounds similar to an orchestral woodwind or brass instrument, often named some variation of "trumpet", "oboe", or "clarinet".

The four sorta 'tubular' parts are called "shallots". They are actually made from thickish (for their size) sheet brass which is hand-formed around a mandrel, then ground flat to create a very specifically shaped (kinda pointy) opening on one side, after the 'bottom' of each is closed by another soldered-on piece of brass. The other four slender, thin brass pieces are the "reeds" themselves -- they are originally made with an again very precise size, thickness, and most importantly *curvature* to them. In their actual usage, one 'reed' is mounted over the opening in one 'shallot' (to which they are, of course, very closely matched) within the bottom of one pipe -- when air is then blown into it, it vibrates/oscillates at some certain frequency which ultimately creates one "musical note". I don't know exactly how old these pipes are/were nor where they came from, but would guess probably USA made in the 1950's-60's

SO, ANYWAYS. I drilled a tiny hole in the top of each one, then added craft-store split-rings in order to hang them all together on a funky little piece of (very stout for its gauge...piano string wire maybe?) curved wire which was actually picked up off the ground (in a parking lot behind a church) in the same shape it remains in. [I knew when I picked it up, last summer I guess, that I'd find *some* use for it eventually...? <lol>]

For the moment, I just hung it on another necklace (a shark's tooth 'surfer' thing, souvenir of Virginia Beach) which was already there, until I come across something else for it. The shallots actually have a rather pleasant 'ring' to them (like small bells) as they swing around banging into each other and the rest of the assorted beads and chains and stuff...I gotta say I think I'm pleased with the addition...?? ;-) :-)

[and now the dilemma...what category to post this in...? I think I'll use "musical instruments/organs", since that's where they first came from...??]