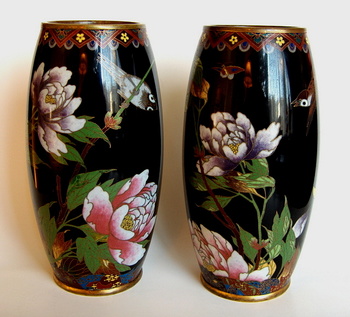 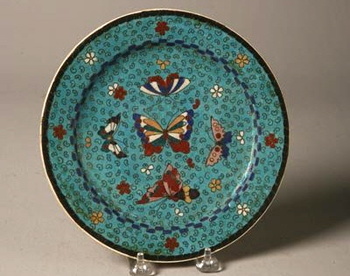 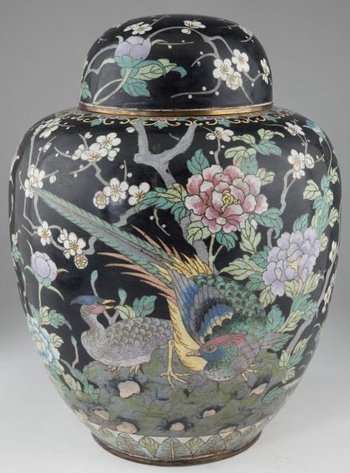 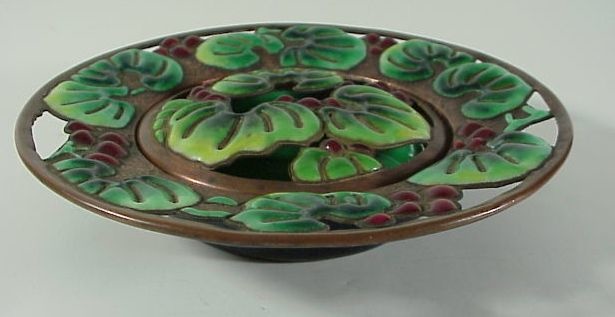 What is Meiji, the Japan reign of the emperor during the period I am referring to. That is how Asian antique collectors describe their pieces, either by the Chinese reign of the many Qing emperors between 1650 to 1906, or the Meiji reign of 1868 to 1912.

I was a cloisonne collector for many years, did a lot of research and acquired much documentation about it, created a basic information site and eventually offered an information service to people for $5.00 a piece about their Asian cloisonne,. from 2008 to 2014.

Since then my new focus is on glass, I picked the Art Deco era, or 1919 to 1939, which coincides with the Czech interwar period. I am also interested in other types of glass, this is such a vast and complex category, it would take several lifetimes to be completely informed about it all.

Image 1. Large pair Japanese cloisonne vases, what we call a story pair, as the nature motifs designs flow around each vase and continue on the other.

Image 2. A ceramic plate, with a metal cloisonne decoration by Kinkozan, signed on the back as such. These were fragile and brittle due to the multiple firings in the kiln.

Image 3. A large Japanese cloisonne ginger jar container, with the traditional motifs of the Ho bird, or the bird of paradise, with the symbolic rock of life and the blossoms of spring and summer.

Image 4. A wireless copper pot pourri dish with open work lid, applied with enamel, and tooled to form the design of leaves and berries. Produced by the master craftsman Ando and marked.