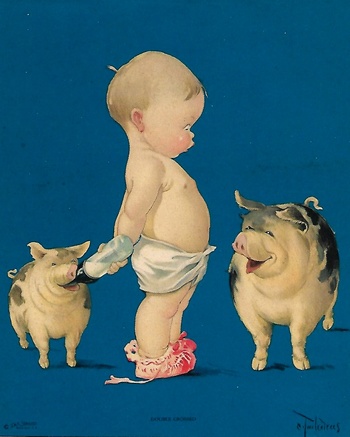 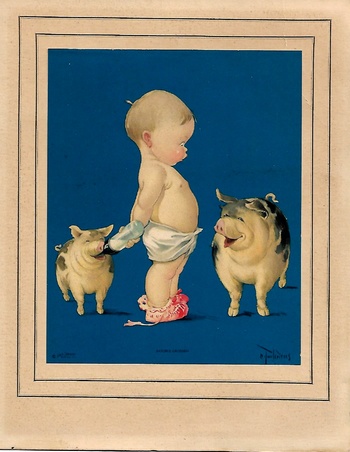 Charles H Twelvetrees, became famous for his funny Child depicted illustration, was on is apogee in the 1900s, this illustration found on a backing from another print, Title (in the center) " Double Crossed" as viewer we wonder why, LOL, on the lower right U.R.C made in USA and on the lower left sign C.Twelvetrees.
Preserved in this condition made this print so bright and very desirable for collectors.

Charles H. Twelvetrees was born in Utica, New York in 1872 and died in New York City in 1948. Early in his career he was a portrait artist but there is no record or photos of his portraiture. He began illustrating postcards around 1905.
Charles was married three times. His first wife committed suicide on Christmas night 1902 after a quarrel; she was 25, he was 29. He married again and had a child, (Clark), in 1905 with his second wife, Rose. His third wife, Vera is known only from census records in the 1940's. There is no mention of family members in his obituary leading to some erroneous speculation regarding his life and career. The New York Times obituary indicated he was 60 when he was actually 15 years older. Charles Twelvetrees son Clark was a mediocre actor and suffered from alcoholism. He survived a six story fall, (jump), from a hotel room in 1927 but died in 1938 when he was knocked down in a street fight. Clark was married for three years to Helen Jurgens who became the internationally known actress Helen Twelvetrees. She divorced Clark in 1930. There’s a lot more behind the stories mentioned here… My book documents the details and shows images from Charles Twelvetrees life and a career that encompassed more than fifty years, at least forty as an illustrator of mischievous children.
Various sources have claimed that the Twelvetrees illustrations were done by a father-son team or that his name was Charles R. Twelvetrees. He signed his work with several different signatures including 12trees, C. Twelvetrees, C. H. Twelvetrees, CT and variations of each, some slanted back, some forward. The signatures often had a lower case c with a tall capital T, smaller letters “we,” tall “l,” small “re,” tall “t,” small “ree” and a tall “s,” (some with a small “s”), preceded or followed by a copyright year. Some of his work has been erroneously credited by a publisher to “C. R. Twelvetrees.” This book is the result of many years collecting his work, researching and compiling details and data about his family and career. It will put to rest speculation about who the artist was that created those happy, sad, clever children and creatively drawn animals.