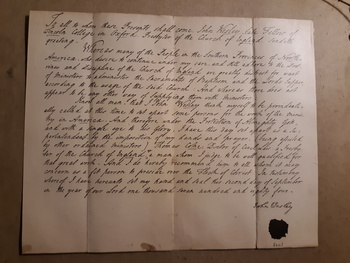 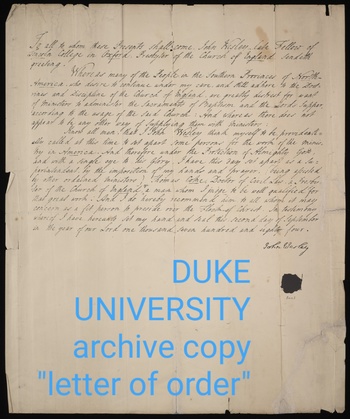 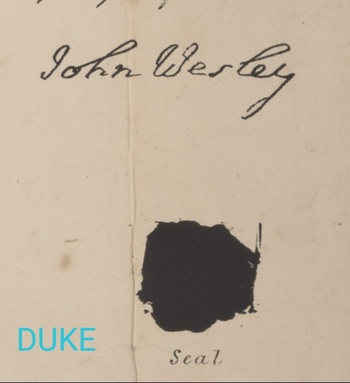 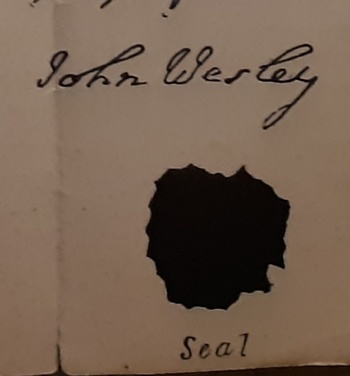 Duke University has the exact copy which they so kindly provide in a free public use online digital image ( 2nd & 3rd photo). I could use some research help in England if anyone can access the records @ University of Manchester, London UK or Methodist Missionary Society Archives.
My hypothesis : IN 1784 when Thomas Coke and Associates were sent to America by John Wesley to establish the Methodist Church of America, he included with Mr. Coke ( and/or his associates) at least 100 copies of a facsimiled letter , known as the " September 2, 1784 Letter of Order, for Thomas Coke" or referred as such by Duke University who is one of five known owners of the above letter. He arrived to America in position as Superintendent of the Methodist Church. He distributed these letters among the sixty of so preachers who attended the Assembly in December and I would also believe several copies of this letter were passed into the hands of influential people and friends in America. On the first copy (above) note the crispness of the lines in comparison to the identical facsimile from Duke. The first copies came off the printing press in better condition than those at the end of the printing run. I do not believe many of these letters survived those tumultuous times and I would go so far as to say that some of these letters were possibly wadded and hurled with rejection at this appointment of a foreigner who was acting like a Bishop and which led to much debate and contentions during those ten days in December of 1784.
The original letter of this facsimile reside in the archives of Methodist Missionary Society at London University and I would imagine they also own a facsimile copy . Rylands Library is said to own a copy/ facsimile.
And Drew Library (N.J.) is said to have a copy of this facsimile in their archives. And Duke owns a copy as shown above with the FIFTH known copy.
MY MAIN INQUIRY : How many letters were sent to America with Thomas Coke and company??? A Thesis could be done on this small area of " the letter",
Thank You to whomever can help answer that one question.

Letterheads and Billheads
See all 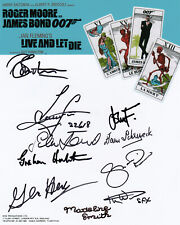 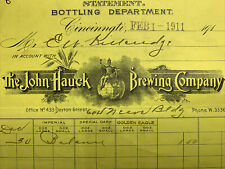