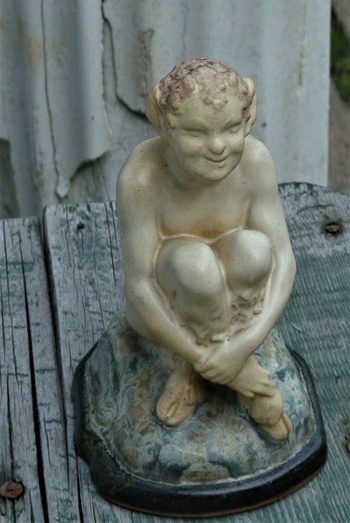 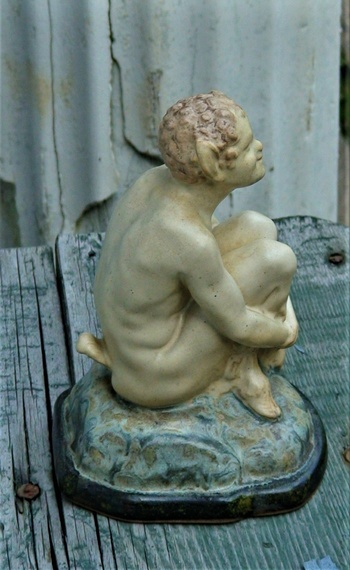 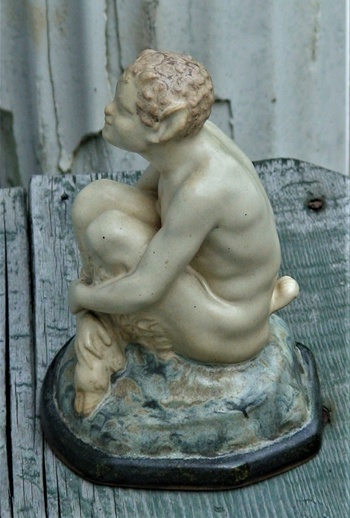 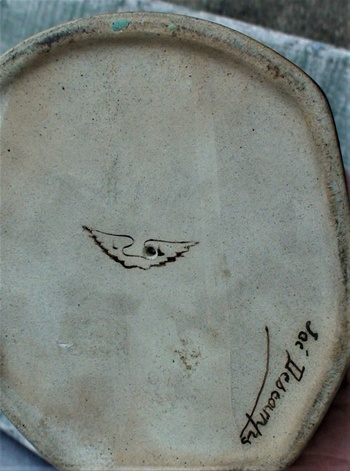 From the internet:
Very rare French Art Deco ceramic sculpture of a seated Faun designed by Joe Descamps (sometimes spelled Descomps) and made by potter Louis Lourioux and bearing both their marks. Descamps (1869-1930) is widely known for his Art Deco Chyrselephantine (bronze & ivory) sculptures of exotic women. He studied under H. Hoilin and exhibited regularly at the Salons of the Societe' des Artistes Francais and was elected a full member in 1893. He designed and executed a wide range of items, first in the Art Nouveau style and later in Art Deco, including jewelry, sculptures in bronze and in stone & ceramics. In the 1920s he concentrated on bronze & ivory sculptures mostly edited by Etling. Louis Lourioux (1874-1930) began producing ceramics in Foecy in the Art Nouveau style around 1902. He was known for his glaze techniques. This Faun is 5 7/8" tall and is covered in a soft matte glaze including an interesting blended base.
Joe Descomps

Joë Descomps (1872-1948), was a well known French sculptor and jeweler who utilized casting, engraving and enamels to create exquisite jewellery. He received his early training at Falguières under H. Hiolin, an engraver and metal designer. In 1883, he became a member of the French Society of Artists, and by 1898, he had risen to prominence as an artist. He received an honorable mention the same year for several pieces; two small statues and three gold brooches, Insouciance, Le Sommeil and Enfant nénuphar. Descomps moved from his location on 399 Rue des Pyrénées, to 37 Rue du Moulin-Vert in 1900. From this location, he exhibited jewellery cast by the firms Louchet and Rambour. In 1908, he participated in an exhibition at the Museum Galliera entitled "Precious Head Ornaments". His jewellery often depicted sculpted female forms within naturalistic floral and pastoral settings.