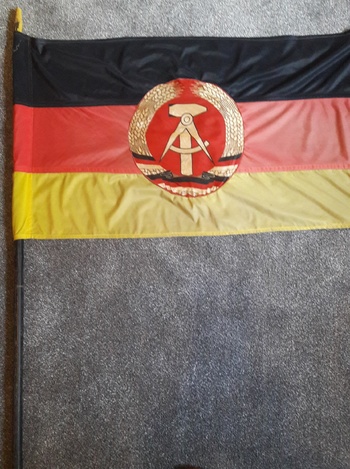 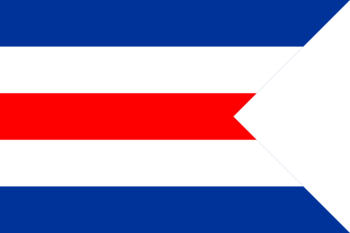 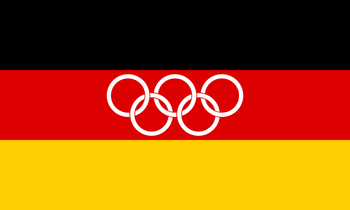 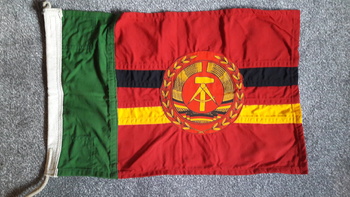 Here is my flag of the Deutsche Demokratische Republik aka German Democratic Republic, aka East Germany. Still on its original flagpole. East Germany is the more interesting of the two post war Germanys to me so forms most of my collection.
After the defeat of Germany in World War II, the Swastika flag was outlawed. With Germany split into 4 by the Allies this meant there was no longer an official flag of Germany. German ships however, were still required by maritime law to display a national flag of some kind. As a provisional ensign of Germany it was decided to use the international signal pennant for the letter C, cut into a swallowtail, known as the C-Pennant. (picture 2, wikipedia)

This flag remained until 1949 when the now distinctly separate East and West zones both chose the familiar black-red-gold tricolour design as their flag. The two flags remained identical until October 1959, when the East German government changed its flag by adding its coat of arms to the centre. (picture 1) In West Germany, these changes were seen as a deliberate attempt to further divide the two Germanys.
Interestingly, Germany entered a united team into the 1960, 1964 and 1968 Olympics, where they entered under a special Olympic flag. (pic 3, wikipedia) After 1968 the two counties entered separately under their own flags.
Finally for picture 4, back to a real flag again. This one is for the East German border guards. Note how this military flag has a border around the centre emblem, making it slightly different to that of the first, state flag. (picture 4)
In 1990 East Germany was absorbed into West Germany as the two nations unified and the DDR coat of arms flag was no more.