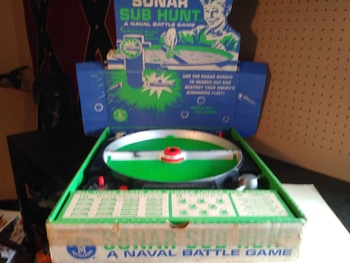 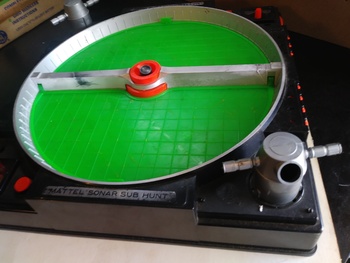 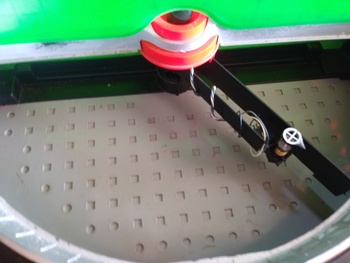 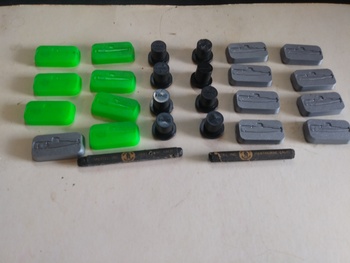 Picked up this Mattel Sonar Sub Hunt Game # 451 made in 1961. This adds to my collection of toys I had in my youth. I got mine around '62-'63 I think. Each player has 8 subs and 4 mines. The players place a recon sub in the opponents territory and then place 7 subs and 4 mines in their territory. You move the dials in the middle to move to position the cross hairs on a potential sub target, but remember where you placed your recon sub and watch out for the mines! If you are positioned over a sub and press your fire buttons for depth charges, the cross hair will illuminate and if you hit a mine the buzzer goes off. Your opponent observes through his periscope to varify if you hit one of his subs or foolishly sunk your recon sub. You mark potential targets, hits and mines with crayons on the grid. You get points for hits and finite amount of depth charges.
It's missing one green sub, but has an extra silver sub. It even has two original crayons out of total of six in three colors. The light hit indicator works but the mine detector buzzer doesn't. These usually don't work at all electrically anyway. I might try to get the buzzer working later, everything is sealed and it's hard to get to things to troubleshoot unfortunately.