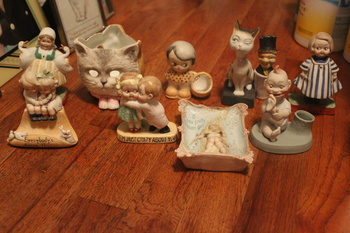 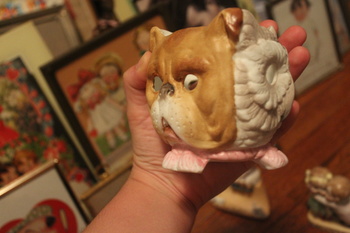 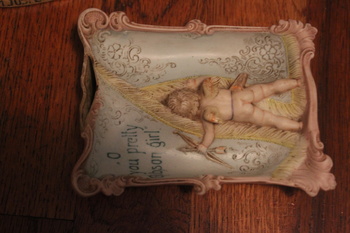 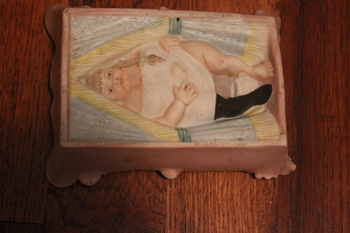 My burgeoning collection of antique Schafer and Vater bisque pieces represents the factory's collaborations with two lauded illustrators and a cartoonist.

The googly-eyed couples, limned on the left-hand side of the first photo, and the googly-eyed swayer, boldly wearing her blue-and-white big top frock, are stylistically attributed to Grace Wiederseim Drayton, progenitor of--amongst lesser-known characters--the Campbell Soup kids. Peter, the sable-haired, googly-eyed crowled boy with a woven basket, is a character from Chloe Preston's "Peek-a-Boo" series. On the right-hand side of the photo, Snookums, the bucktoothed babe salivating over his toothsome digits, is a beloved comic strip character: son to George McManus' clumsy couple, the nameless newlyweds.

The bawdy flipper, limned in the third and fourth photos has, for a long while, been in my family. My mother had, unknowingly, stored my great-great-aunt's debauched flipper in a seldom-opened cabinet. My mother was, of course, rather perplexed by my exilience. There are not many persons in their mid-twenties who, like I, would be enthralled by a mordacious flipper--libidinous Cupid's leering at a gorbellied "'Gibson girl.'" I firmly embrace my quiddities.

In the second photo, my tri-faced pixie lamp, for which I had fervently searched, comprises the tawny face of a bulldog, the hoary face of an owl, and the cinereous face of a feline.

And, yes, I am the "'contemptible scoundrel'" who removed the cork from W.C. Fields' lunch. Prosit! 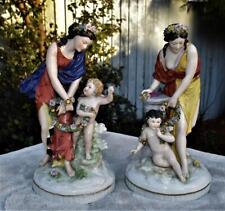 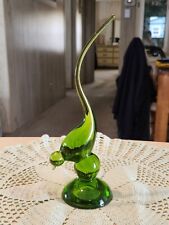 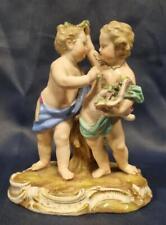 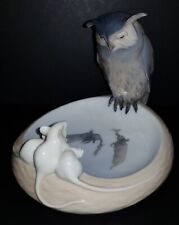