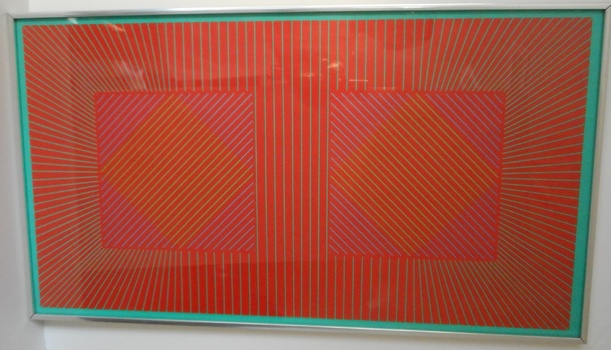 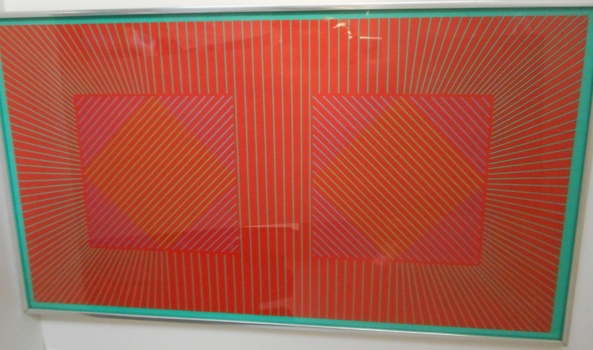 I am sucker for anything Op Art, and that Mid Century Modern look is still so hot right now, showing no signs of waning in popularity. I bought this at an auction I worked at five years ago, and without a signature, it was the only piece in my collection that still had me stumped. I am usually very resourceful in sleuthing out attribution, but I had this stashed in a closet until I got around to replacing the missing hanging wire, which I am still having a hell of a time finding the right size eye hole hardware for to fit the 1/4" track.

You've gotta love this website for crowdsourcing information, and along the way to posting an Unsolved Mystery here, I threw it up first in a facebook group full of art dealers. Five minutes after posting in an Art Identification group, it was revealed to be a 1963 serigraph by Richard Anuszkiewicz (American, 1930-2020) titled "Exact Quantity." Coincidentally, it was from the same accumulation as the Modigliani I posted about on my Collectors Weekly Show and Tell. He obviously had no clue who it was by. As a then unidentified print, this was actually about to be passed at the auction, until I swooped in, and pulled out a last second, lowest bid I could have asked for.

Now I finally also have the answer for the right orientation to hang it! It's a shame the artist passed away this year, but at 90, he had a good long career. I was just a little too late to have an opportunity to see if I could authenticate this as part of a specific edition. From the spot of oil based ink I discovered on the back of the sheet when I finally got around to disassembling the frame, and lack of copyright info along any edge, my hope was that it had been done in the artist's studio, rather than mass produced by a print shop or publisher. No bother, it is just my decorating style preference either way.