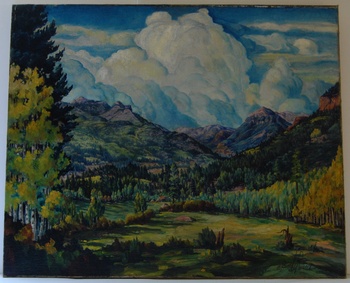 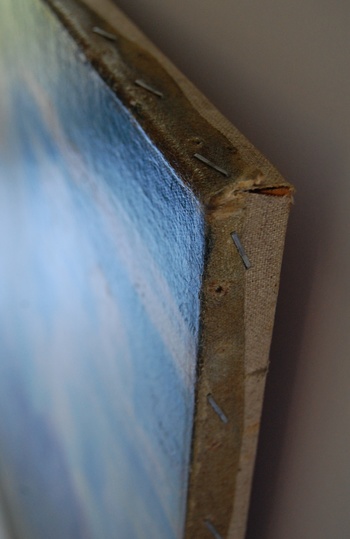 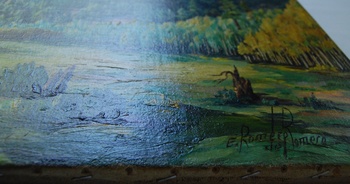 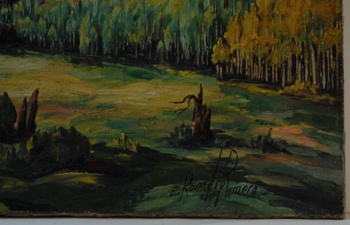 This is a rare example of a slightly larger canvas (28" x 23") I stuck my neck out farther for than usual at an auction. My experience has been that it can be extremely challenging to get any kind of a "deal" on fine art at most auctions, at least in my neighborhood. Florida being the land of New York and other big city retirement, cold-weather refugees, my corner of Tampa Bay has no less than four rather serious players in the fine art auction field within a five mile radius, and that is only reduced by the one auctioneer who recently retired himself after fifty years in business.

This piece was the exception at a high-end auction, where it flew under the radar until the last minute, being sold as choice in a table lot. It was not even cataloged by the artist's name, and was upright in a box along with unknown artists, to be staged in bunches as table space progressively cleared while the auction unfolded. I spotted it from across the parking lot instantly, as far superior than the company it had been keeping. A few minutes of research on a smartphone, as everyone's focus was on better-known artists more prominently staged, revealed to me that it was WPA / New Deal artist Romero de Romero. Art collectors will remember that the Federal Art Project, under the Works Progress Administration, was one of FDR's New Deal programs which sought to bolster the economy in the Great Depression while subsidizing the arts. What I love most about this artist, and that era, is how it exemplifies the differences in perception of many artists today, versus the Depression Era. Romero de Romero technically made his living as a sign painter, until he gained recognition, and probably never stopped. Rather than being a "side hustle," his occupation is what paid the bills during the leanest of times, and the exposure helped propel him into fine art.

I have a personal attachment to the landscape, having studied art history at the University of New Mexico in view of that majestic scenery. Fun fact, the Sandia Mountains acquired their name because the rocky high desert terrain looks like spotted watermelon seeds in the bright red New Mexico sunsets.