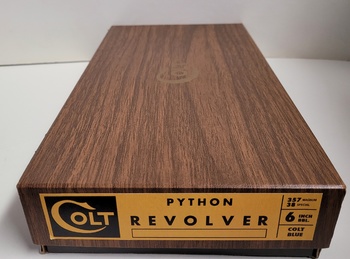 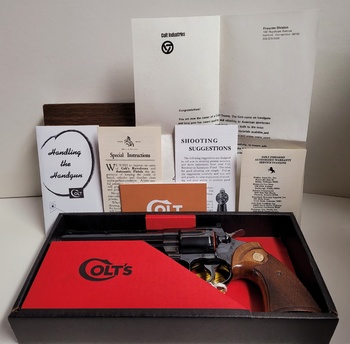 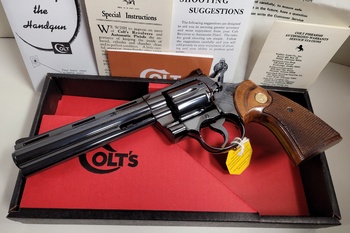 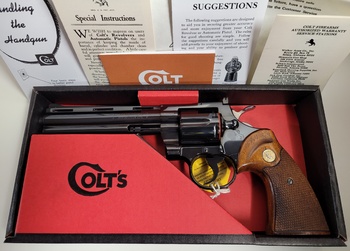 Everyone else seems to be showing off their firearms, so here's one of mine.

I bought this as an investment gun. The prices have skyrocketed in the last several years. 3 days after purchasing this gun, I saw a 1967 sell for $2600 more than I paid for this gun. My gun is just as nice. That gun sold for over $5K and that's before shipping, FFL fees and taxes(depending on your state).

Many consider this one of the finest revolvers ever made. The royal blue finish is also considered some of the best ever achieved. They did this by training their employees on various degrees of polishing.

Some Interesting facts...my gun is an early 1965 manufacture. And they made less guns in 1965 than they did in 1964 and 1966. Another argument by some, is that CNC machining was introduced during this period(1964/65) and after 1965 they were using more CNC and were able to manufacture more Pythons that were in high demand.

COLT PYTHON
"The Colt Python was first introduced in 1955 as Colt's top-of-the-line model and was originally intended to be a large-frame .38 Special target revolver. As a result, it features precision adjustable sights, a smooth trigger, solid construction, and extra metal. Pythons have a distinct appearance due to a full barrel underlug, ventilated rib and adjustable sights. Colt originally manufactured Pythons with hollow underlugs but left them solid to work as a stabilizing barrel weight. When the revolver is at full cock, just as the trigger is pressed, the cylinder locks up for the duration of the hammer strike. The gap between the cylinder and forcing cone is very tight, making it very accurate and helps with velocity."