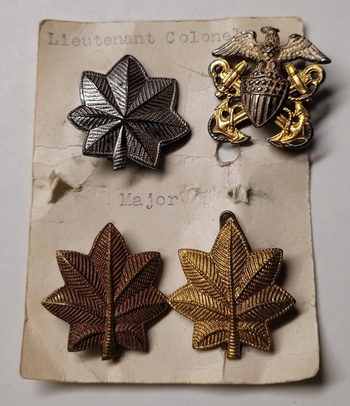 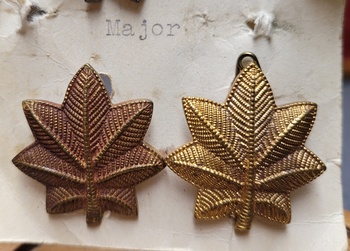 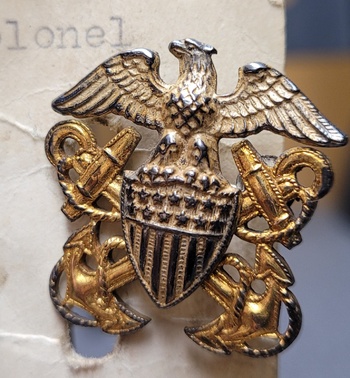 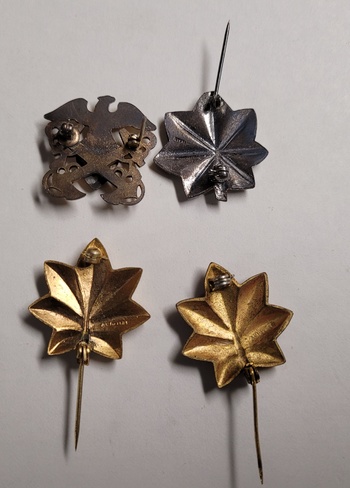 Found these amongst some of dad's things. They appear to be WWII? There was also some WWII dog tags with these items, so I believe they are the same era. Dad was in the Air Force from 1953 to 73 and worked as a flight simulator technician, so they were not his. The dog tags were not his and date to 1944/45 era.

The top pin is Lieutenant Colonel. The bottom ones are Major pins, although I'm not sure why one is darker? The top right appears to be a Navy hat pin. And FYI, the navy pin was not attached to the card, I pinned it there for display.

Not sure what branch. From what I've read all the branches used the oak leaves?

Although small, the detail is very well done and crisp.

Any information or comments is appreciated.

OAK LEAF?
A single leaf was first used as the rank insignia for Majors in the United States Army in 1835, but at the time the leaf’s color was variable (either gold or silver, depending on the wearer’s branch)

WHY OAK?
From what I found, this is a plausible explanation..."the oak is the tree and the tree is the oak. It’s seen as a symbol of strength and endurance; even its leaves display a tenacity, less easily shed in the fall than the leaves of other trees."