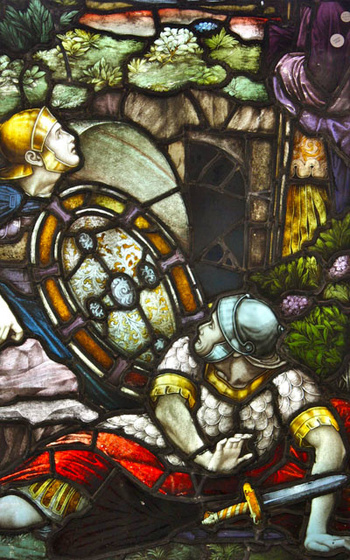 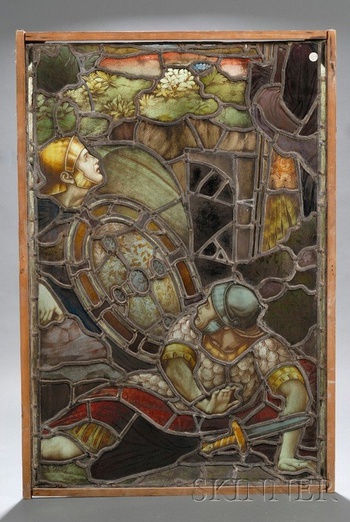 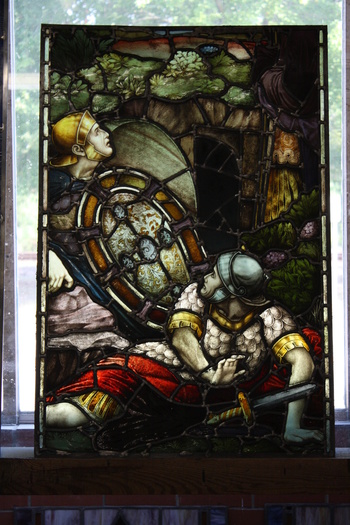 The subject of this finely crafted late 19th century stained glass window is the Resurrection, Easter morning. Gospel of St. Matthew Chapter 28 verse 4 states, " And for fear of him the guards trembled." The window is from the lower left portion of a larger 6 paneled work. Yonkers, NY. was noted on the temporary wood frame, otherwise no other information is available as to the window’s origin. The maker, however, has been determined to be by Heaton, Butler & Bayne (London) given similar examples and how the glass pieces were constructed. Heaton, Butler & Bayne were the leading manufacturer of Gothic Revival style stained glass. During a long career, the firm produced stained glass for numerous churches throughout the United Kingdom and the British Empire, as well as the United States of America. Westminster Abbey includes a Heaton, Butler and Bayne window, installed in 1868. Other windows by this firm are in Wimborne Minster 1857, Peterborough Cathedral 1864 and St Mary's Parish Church, Hampton c1888.
This window was completely restored in 2010 by Stained Glass Associates, Knightdale, NC. and installed in a custom dark stained, quarter-sawn oak framed lightbox.