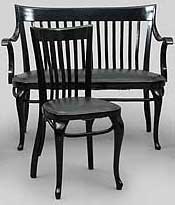 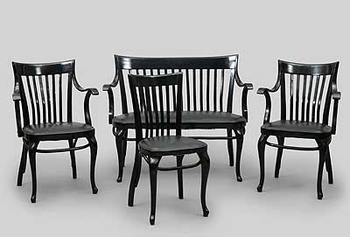 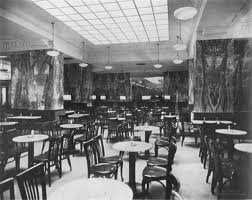 Some chairs and a bench by the Austrian architect Adolf Loos, designed in 1913 for the Café Capua, Vienna, manufactured by Thonet, black lacquered beechwood.
I bought the pieces six years ago in a small auction house in Germany.
I use the bench and chairs in my apartment and I like the idea that all the people visiting the Capua Café in Vienna used this furniture.
The picture on the right shows the Café Capua's interior around 1914.
The bench has also a nickname, I call it "Alma Mahler's bench", as I know that Alma Mahler was a regular customer of the Café.
(Alma Maria Mahler Gropius Werfel (born Alma Maria Schindler; 31 August 1879 – 11 December 1964) was a Viennese-born socialite well known in her youth for her beauty and vivacity. She became the wife, successively, of composer Gustav Mahler, architect Walter Gropius, and novelist Franz Werfel, as well as the consort of several other prominent men. Musically active in her teens, she was the composer of at least seventeen songs. In later years her salon became an important feature of the artistic scene, first in Vienna, then in Los Angeles)

"Ornament is crime" declaimed Adolf Loos - an influential architect, designer and campaigner for simplicity and functionality in design.
Born in Brno in 1870, Loos grew up in the centre of the soon-to-crumble Austro-Hungarian empire. He studied architecture in Dresden and then, after three years in the US, joined Carl Mayreder's studio in Vienna. He set up his own practice in 1897 and produced his first major work - the Café Museum in Vienna - in 1899.

With friends like Oskar Kokoschka and Ludwig Wittgenstein, Loos belonged to a group of free-thinkers opposed to the conservative supporters of the Habsburgs. From the late 1890s, he began to stir up debate: his arguments against the Viennese Secession style were widely published, while the Goldmann and Salatsch department store (now known as the Loos Haus), which he completed in 1911 opposite the Hofburg in Vienna, caused a furore with its startingly plain facade.

As well as other public buildings in Vienna (e.g. the Knize men's clothing store or the Kärtner Bar), Loos also designed several private homes, among them the Steiner House and Rufer House in Vienna or the Khuner Villa in Kreuzberg, Austria.

Yet despite the striking simplicity of his exteriors, Loos' interiors were decorated comfortably, using beautiful materials and elegant details. One of his most attractive projects, the Müller Villa in Prague, built in 1930 and restored in 2003, was the culmination of his pioneering 'Raumplan' concept - designing continuous spaces for living rather than regularly divided floors with limited flexibility. Loos rarely designed furniture - he was more prone to adapting tried and tested earlier designs, such as the knieschwimmer armchair he placed in several interiors designed in the 1920s.

In the 1920s, Loos lived in Paris, travelling often to Austria, Germany and the new Czechoslovakia. He exhibited, lectured and took on projects all over Europe. Exhibitions of his life's work toured several countries in the early 1930s. (Thanks to Design Addict)