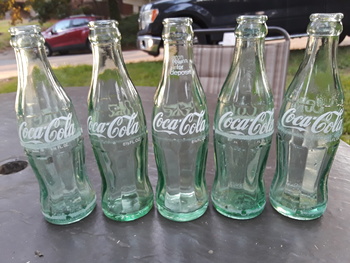 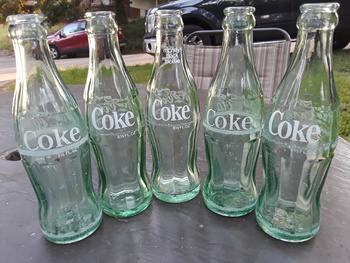 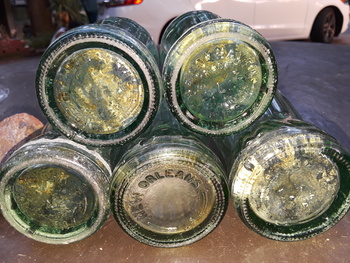 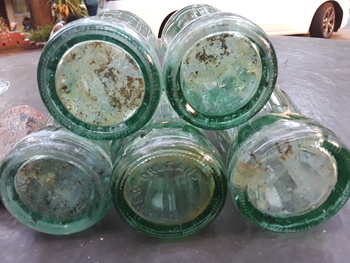 These five recovered recently from a corner in a church attic on the way to the pipes of an organ installed in the late 1970's, in a bucket along with assorted screws and bits of extra hardware strongly suggesting they were (all) left behind by those that installed that organ there then. After dislodging the numerous cigarette butts also found (quite thoroughly dried out) inside each one away with a long stick, they were simply rinsed out and off, thus a certain amount of crud remains in the bottom of each.

They all appear identical at a glance but each is actually unique, mostly because the bottoms of each bottle label them as being from New York NY, New Orleans LA, Baton Rouge LA, Hendersonville NC, and Brookhaven MISS. There are also slight differences amongst the painted on labeling, and some have extra letters, symbols, or codes either on their bottoms or near the bottom of their sides. Unfortunately the remaining crud inside the bottles makes it somewhat difficult to see/read all those various bottle maker's markings in the pics, but since I'm not specifically a Coca-Cola collector they'll probably end up somewhere outside displayed with other odd bottles anyway so I'm not too concerned about that -- if anybody *does* want to know anything specific about any one, just leave a comment and I'll try to clarify! :-) :-) ;-)