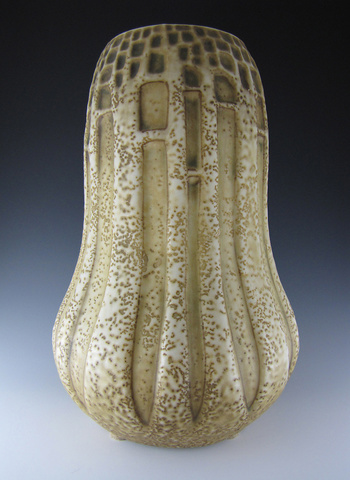 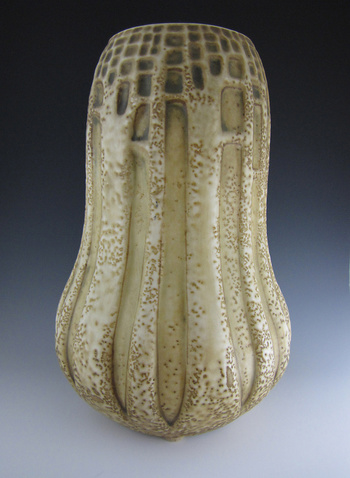 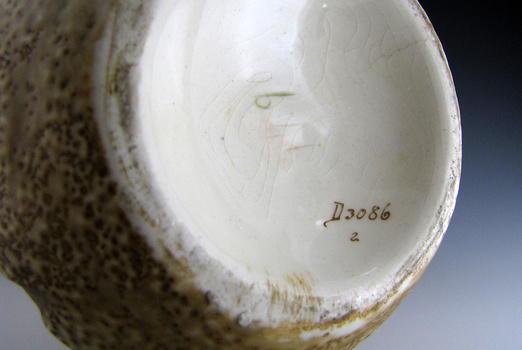 Ernst Wahliss Amphora vase, designed by Paul Dachsel, circa 1908-10. This bulbous shaped vase is carved with stylized trees in a very modern fashion for the times. This "tree" vase presages the transition from Secessionist ornamentation to minimalist modernism popularized by other Bohemian artists of the time, such as Loos. The vase is covered in an ivory and brown matte glaze. Ernst Wahliss red ink stamp (softly struck), inscribed with the form number #9490 and inked with the possible glaze/color number “D3086 / 2” on the bottom. Dimensions: 7.5”(H) x 4.5"(W).

By the late 1880s, merchant Ernst Wahliss had established himself as Vienna's leading retailer in porcelain goods. In 1894, he purchased the Alfred Stellmacher factory in Turn-Teplitz, Bohemia, and began to produce decorative ceramics under the name Ernst Wahliss Kunst-, Porzellan- und Fayence-Fabrik. By 1907 his son Gerhard Martin Wahliss owned the factory and continued to create a variety of functional and decorative items in earthenware and porcelain.

An example of this Dachsel vase form and glaze/color from the Cobabe Collection is featured in Bryon Vreeland's "Monsters & Maidens" Collectors Ed. (page 466).