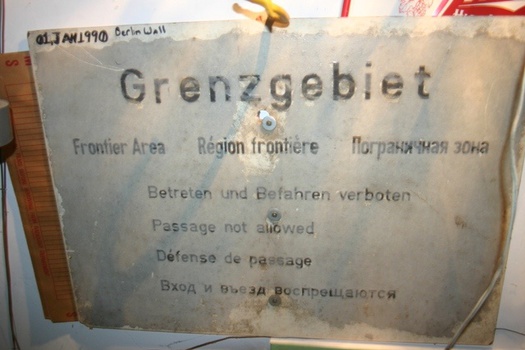 I was stationed in Germany when the wall came down. I spent New Years Eve at the Brandenburg gate. Talk about a party! There was Thousands of people just having a good time as humans not political enemies. Prior you had to enter East Berlin through Check Point Charlie, they also had a gate open through the wall near the Brandenburg gate which east and west berliners were crossing on this night. Late into the evening everyone just started climbing on the wall, sliding through holes that were chipped out and just enjoying each others company. I climbed the wall over to East Berlin and congregated with some lovelies and had a great time, handing out white roses. The wall near that gate was actually 2 walls with an open spance, this sign was halfway between the 2 walls where it was routinely patrolled. The next morning I went back to get some of the concrete from the wall as a souvenir. There was a hole in the wall and I seen the sign and knew I had to have it. I watched the soldiers on the east side until they were well away and through the wall I went, being cheered by a crowd as I ran for it. I snagged it off the post with ease and hauled butt back to the hole. It was an honor to be there and see the events unfold as the wall all but disappeared. I'll pass it and the pictures I took there on to my son who I told to never sell it, It's a piece of world history.