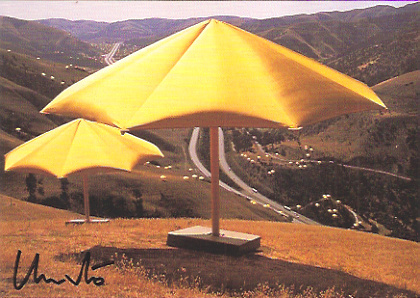 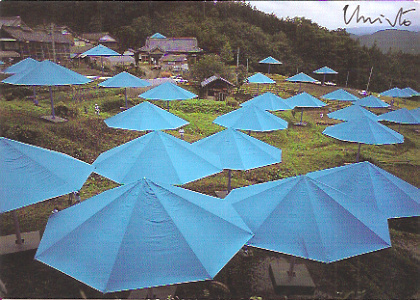 In 1991, I was fortunate enough to edit a story by my pal Jeff Book about Christo's Umbrellas project in Southern California (yellow) and Japan (blue).

We met Christo and his wife and collaborator, Jeanne-Claude, at Tejon Ranch, where the SoCal portion of the project was being readied for installation. After Jeff asked his questions and I snapped a roll of slides, we drove around the hills with Christo as he pointed out sites where his 1,700 or so Umbrellas would be placed.

After the Umbrellas were finally opened, we took our kids and my aunt to see them. If I recall correctly, our oldest son (then 4) was stung by a yellow jacket, but the 15-to-20-foot wide Umbrellas made an impression on him. A few weeks later, when winds blew over one of the Umbrellas, killing a spectator, our son sent Christo a drawing of one of his Umbrellas behind a wall, so people could view them safely. Some time after that, Christo reciprocated with a nice note and an envelope full of signed postcards of various projects.