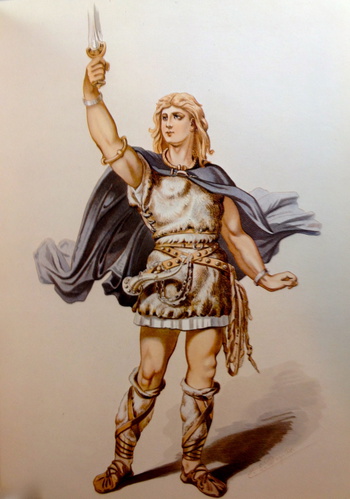 Professor Carl Emil Doepler was recruited by Richard Wagner in a letter dated 17 December 1874 to design and oversee the making of costumes for the premier of his operatic tetralogy Der Ring des Nibelungen at the first Bayreuth Festival in August of 1876. Professor Doepler was a well-known Professor and Lecturer on costume at both Weimar and Berlin. Wagner wrote (translated from German), "I regard the problem I have set as offering a rich field for invention, for I actually ask no less than a characteristic picture made up of individual human figures, which will call up before our eyes with arresting vividness the people and events of a bygone culture far removed from the world of our experience."

Professor Doepler produced 40 full color plates for the production, eight of which were reproduced in A Memoir of Bayreuth 1876 - C.E. Doepler, by Peter Cook, published in 1979. The book also includes selected letters between Professor Doepler and Richard Wagner as well as personal recollections of the Professor that were first published in 1900, nearly 25 years after the festival. The designs were enthusiastically received by the composer, and copies of the plates were sent by request to both Kaiser Wilhelm and King Ludwig II. Despite nearly two years of collaboration between the two men and months of production leading up to the opening at Bayreuth, after their farewell in 1876, Professor Doepler never saw Wagner again, nor received a single line from him. Still, he joined the "Berlin Richard Wagner Society", and even served as its chairman for four years following the composer's death in 1883. In 1889, Professor Doepler published a full set of his "figurines", published by A. & C. Kaufmann, and dedicated to His Majesty, Kaiser Wilhelm II, which the Kaiser graciously accepted. A copy of this volume was offered up on eBay about a year ago, which was where I first caught a glimpse of Professor Doepler's image of Sigfried (see second photo) and immediately recognized it as the same image painted in enamel on a glass ewer in my collection. I had previously attributed the ewer to Josephinenhütte by comparison to a photo plate in Gary Baldwin's book Moser Artistic Glass, Edition Two, showing a signed piece in the same shape (see photos 3 and 4). Though the eBay auction for the Doepler plates ended much higher than I wanted to pay, I was fortunate enough to get a copy of Peter Cook's out-of-print book on Amazon, which has reprints in brilliant color eight of the forty original plates, chosen because they were most representational, and which also includes the Sigfried plate that matches the image on my ewer. As a lover and student of both music and glass, the two worlds happily collide in this short volume by Mr. Cook that provides an entertaining read, and the chance to re-visit two passions at once.