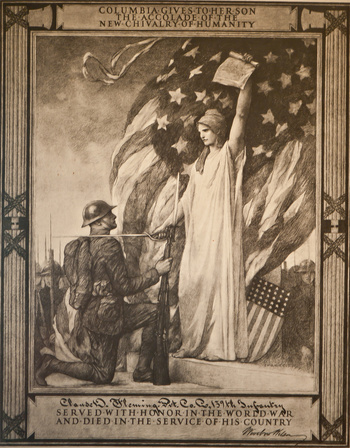 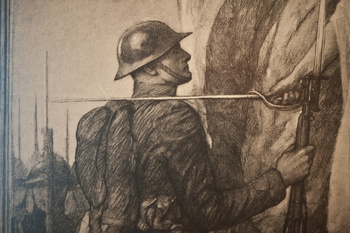 This beautiful Pen and Ink was a gift to the families of the United States service members, whom left for Europe, from cites, towns and farms, in 1918 never to return. Most were in their late teens or early 20's, as was Claude Dallas Fleming, my great uncle. From Maitland, Missouri, he joined the U.S. Army (National Guard) in the search for Poncho Villa. Never having been discharged from the National Guard, he was returned to active duty, at the start of World War I. Claude Fleming would parish on September 27, 1918, on one of the many battle fields of France, at the age of 23. He like many American service men at the time, was unmarried but was from a large family having 7 brothers and 2 sisters. Glades Fleming his sister received this as their mother had passed away from the Spanish flu in 1918. My Grandmother left this rolled up stored in a trunk for over 75 years, as she could not stop crying every time she looked at it. There must be hundreds of these "gifts" somewhere in storage or on display in American. No one is alive who served personality in the Great War but a few who knew these fine Americans, are still with us. The service men who gave their life can still be remember not only on one 1 special day but when ever we can. This Award is framed and hung in my home next to an American Flag which also flew over the battlefield where Claude Fleming gave his all. I have seen a couple of these Pen an Inks, for sale in different Antique and Military shops. If you see one stop and read who it names appears as having given his all, ever if you not going to buy it. You can take his name with you for free, I do. Hardbrake