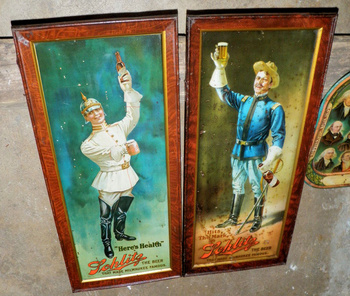 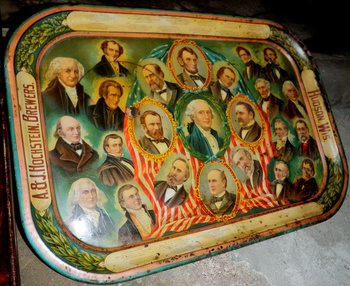 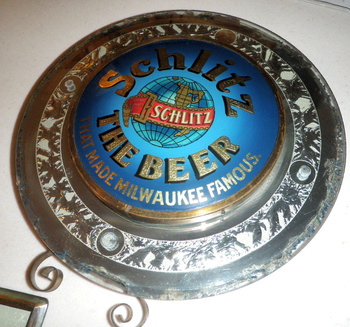 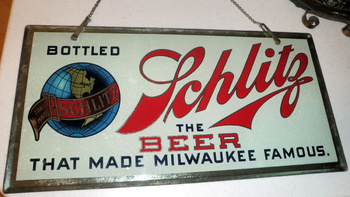 As a bouncer at Hotel Dibbo's in Hudson, WI. in the 1970's, Randy lived next door to an old guy who owned an abandoned hotel/bar, with the bar in the basement, that had a door that opened to the Mississippi river side so patrons could enter from the docks.Like his Dad, Randy collected beer stuff, mainly openers and cans, and the owner of this place brought him a few small items over the years. He was always somewhat distant and not overly friendly. This building never re-opened after prohibition. But one day, for whatever the reason,he said "go downstairs and check it out" Randy said it was dark and damp, with the bar warped and some of the ceiling coming down from moisture. He gathered these beer items in the semi-darkness before the old guy yelled downstairs "thats enough" but he emerged with these signs.

All from this bar, who obviously served Schlitz, along with the stock (pre-printed with the image, and breweries could add THEIR name without incurring art & layout charges) president's tray from Hudson, which I've only seen in Herb Haydock's first breweriana book. (The brewery location is now the Casanova, an off sale liquor store and adjoining restaurant built along the hill. The caves still exist too) The round Schlitz sign needs to have the faceted jewels replaced around the border,but to have this little "time capsule from the teens" is pretty cool.

Randy was at the "right place at the right time" For that, I thank him!