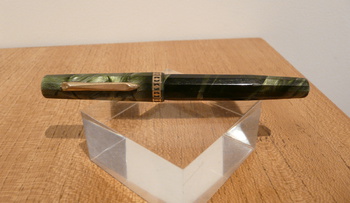 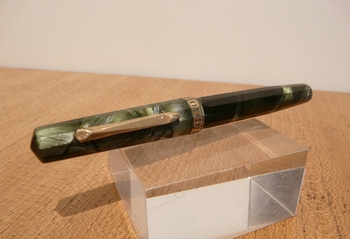 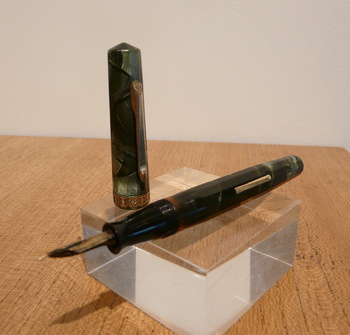 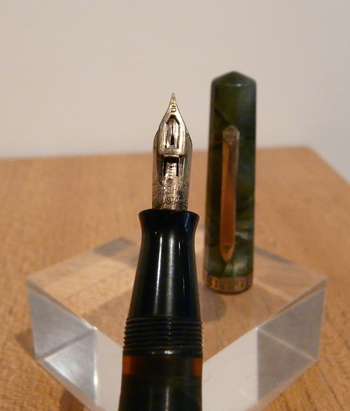 Another item from "the shed".
I really liked the look of this Eversharp and have had it now for over twenty years. It was the deco look of the pen that caught the eye initially and the nib was just so different. I've always liked pens and was interested in calligraphy as well, but I have never been a serious collector of pens.

Today I looked up this pen on the internet for the first time and my first hit was this site:
http://www.richardspens.com/?page=ref/profiles/doric.htm

Richard filled in a lot of gaps for me.
He gave me the model name: "Doric".
He gave me a year: 1931.
"Art Deco was in."
He showed me the competition and outlined the innovation:
"Wahl-Eversharp’s designers went back to the drawing board (or maybe they just never got up after creating the Equi-Poised) and in 1931 introduced a pen featuring perhaps the most authentic and most recognizable Art Deco vision ever created for a writing instrument: the fabulous Doric, whose faceted design (by Robert Back, U.S. Patent Nº D81,742) still turns heads more than 70 years after its appearance. (Note that the advent of the Doric did not signal the demise of the Equi-Poised. The older design continued to appear in the Wahl-Eversharp catalog as late as 1937.)"

I had a designer: Robert Back
It outlined the variations: this one is a Standard-Size.

The unique Features:
"Wahl-Eversharp implemented several features that were unique to its pens, not just redrawn designs of things everyone else was doing. Mentioned above is the company’s ingenious adjustable nib (introduced in 1932), which has a small slider that can be positioned in one of nine notches (illustrated to the right). With the slider moved toward the section, the nib is quite flexible. As the slider is moved notch by notch toward the tip of the nib, the nib becomes progressively firmer. With the slider all the way out, the nib is a rigid (manifold) nib."

The Colour Range was explained: I have a Kashmir! One of the original Doric colours. 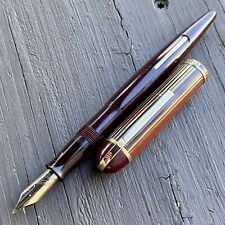 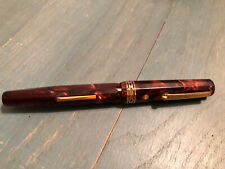