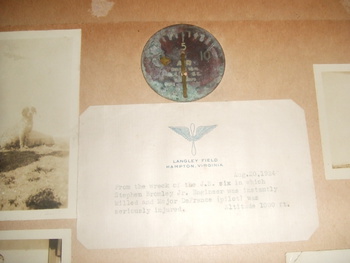 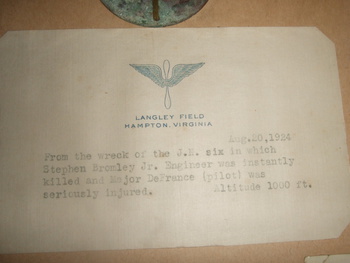 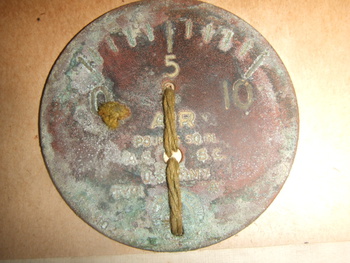 This is a great piece of early aviation history.

It was inside an album put together by a member of the Langely Field Army Fire Department from 1924- 1927.

This particular item appears to be a dial from an early aircraft instrument. The note identifies it as being from a JN-6 Jenny airplane that crashed 20 AUG 1924.

The pilot of the aircraft was Smith DeFrance. DeFrance was a fighter pilot during WW1 with two aerial victories to his credit. After the War he went to college for aeronautical engineering and became an engineer and test pilot for the National Advisory Committee for Aeronautics (NACA). He was also the first director of the Ames Research Center. In the late 1950s NACA was absorbed into the newly created NASA and DeFrance continued to run the Center until his retirement in 1965.

Smith DeFrance's contributions to aeronautics research and development were recognized by his induction into the NASA Ames Hall of Fame.