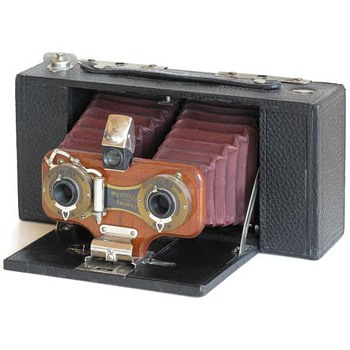 I thought it might be fun to show a couple beautiful stereo cameras that used roll film. Here is a No.2 Stereo Brownie made by Kodak; about 4,000 were made during its run from 1905 to 1910.

Growing up in the 1950s and 1960s, just about every family was familiar with the inexpensive and popular line of Brownie box cameras sold by Kodak (such as the classic Brownie Hawkeye in molded Bakelite). Yet this stereo brownie is an early Brownie not often seen and quite scarce.

Unlike the simple box designs, this is a distinctive, leatherette covered folding camera with twin red leather bellows, wide polished wood face, and funky looking brass shutter with maker's I.D. The original list price was $12 in 1905.