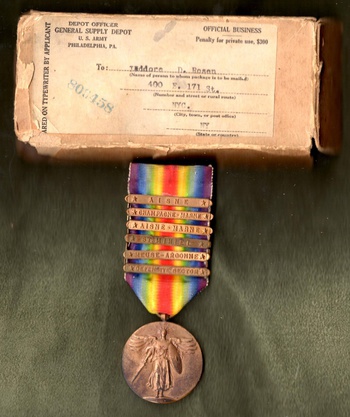 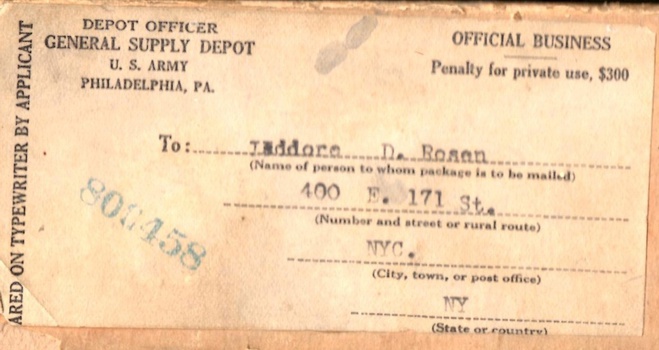 Don’t worry folks, I’ve nearly run out of boxes to talk about. Here we have a six clasp US Victory medal with its mailing box.

Issuance of the victory medal began in mid-1920, when most of the entitled veterans had already returned to civilian life. To get the medal, applicants had to fill out a form at the nearest recruiting office or military post, and attach a certified copy of their discharge. For Army veterans across the country, a victory medal distribution center was set up at the Philadelphia Quartermaster Depot (note the return address) which sent out the authorized medals to the veterans at home. Veterans still on active duty had their medals issued at their current duty station.

Clasps for the victory medal were based on the individual’s participation in each of the campaigns commemorated on the clasps. Having said that, if you know which campaigns a unit was part of, you can get an idea about what unit someone may have been in by the combination of clasps warn. This medal’s combination of clasps corresponds to the Third (Rock of the Marne) Division. No other division level unit has as many clasps as this. (The highest number of clasps known to be authorized one individual is nine, awarded to an ambulance driver.)

This recipient, Isidore(?) D. Rosen (the second and possibly the third letter is typed over) had an address in the Bronx. I’ve been researching the recipient of this particular medal, and am amazed at how many Isidore, Isiddore, Isadore and Isaddore Rosens lived in the Bronx in the years before and after WWI! I haven’t matched the address to any of them, so I am not sure which person this was, but most of them had stories as similar as their names. Most were recent Jewish immigrants from places like Russia and Poland. These were men who crossed an ocean in pursuit of the American dream, but put the dream aside to re-cross that ocean and fight “the Great War for Civilization.” What better men to memorialize this Veteran’s Day?

Military Medal.Bravery in the field...
$287
See all