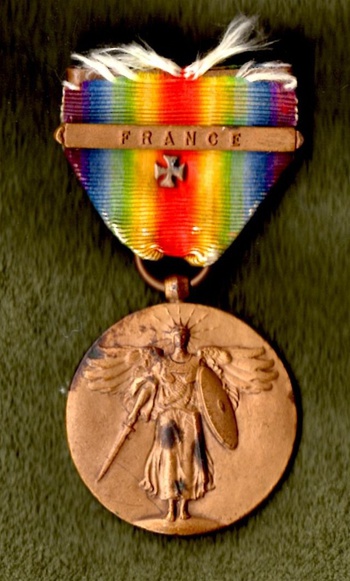 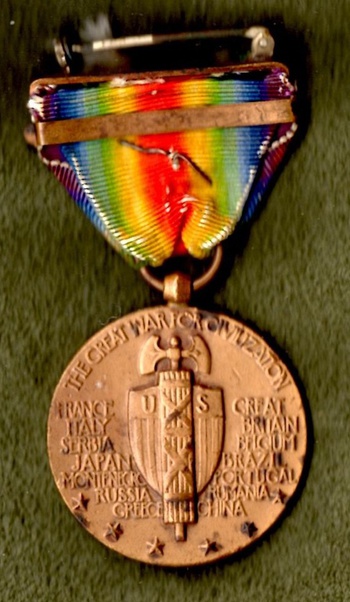 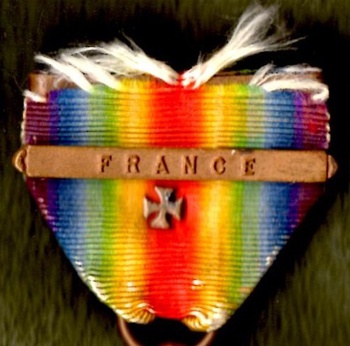 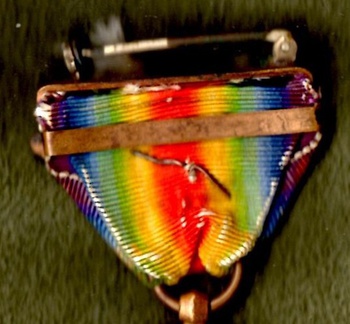 Last year in the days leading up to the holiday formerly known as Armistice Day, I did a series on the Interallied Victory medals of WWI. I’ve added a few more Victories to my collection which I thought I’d share, and in the coming days I’ll also show some medals I think of as companions to the Victory Medal.

This particular US Victory medal with an Army France clasp and silver “Maltese Cross” represents an unauthorized combination of devices that were nonetheless worn by veteran Marine and Navy Corpsmen attached to the American Expeditionary Force (AEF) in France.

The War Department’s original idea was that personnel would wear a bronze campaign star on their ribbon bar to the represent each battle clasp worn with the medal (which named various engagements), and those authorized only the country clasp would wear a silver Maltese cross on the ribbon bar. In the final version of Army regulations, the cross was omitted altogether and personnel were to wear a plain ribbon bar regardless of whether they were authorized the country clasp or no clasp at all.

The Navy had their own system of clasps, but Marines and Corpsmen attached to the AEF were authorized to wear Army battle clasps and country clasps. Navy regulations, however, continued to authorize the cross on the ribbon bar. Although the cross was not authorized on the suspension ribbon of the medal, many victory medals that can be traced back to Marines have the cross on the suspension ribbon.

Alexander Laslo, who wrote the definitive reference book on the Victory Medal, believes this was an unofficial custom within the Marine Corps. I personally believe that recently discharged Marine Veterans (One does not call them “former Marines”), knowing they would more likely wear the medal than the ribbon bar at veteran’s events, chose to put the cross on the medal’s suspension ribbon for wear for parades, etc.

Also, I know that the cross shown is not a true Maltese cross, but that’s what the regulations of the time call it.

Military Medal.Bravery in the field...
$287
See all