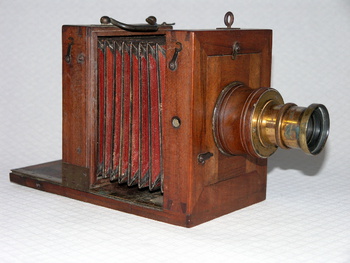 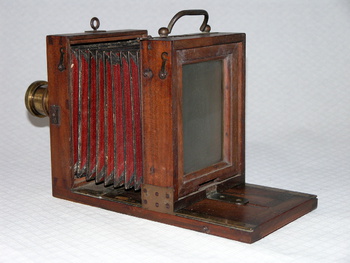 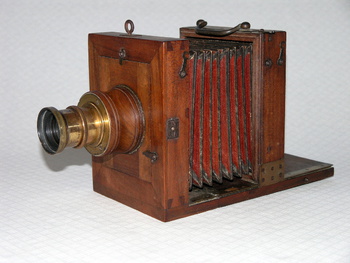 French Very Early Wet Plate Camera |1850-1860 | Tailboard | 9x12cm.
Catalogue No. 0134.
A very early camera in walnut in the French style, from a time when well-to-do would-be photographers could get their estate cabinet maker or joiner to knock them up a one-off camera like this one. The bellows are of a type which can be fairly precisely dated, I am told by a French expert. The camera is deeply stained from the use of wet plate collodion. The lens, marked “A.Tardy, Lyon” is not original to the camera; updating equipment is not a modern idea. This camera was a find from a barn at La Roche-Chalais, in the area between Bordeaux and Perigueux, on the E-70, in France. The new science of Photography was a popular interest among the French aristocracy of the period, and it is reasonable to assume that this camera would not have been used by a farm labourer. Does any photo historian know if there were any famous or historic French photographers working in the La Roche-Chalais area in the 1850s?