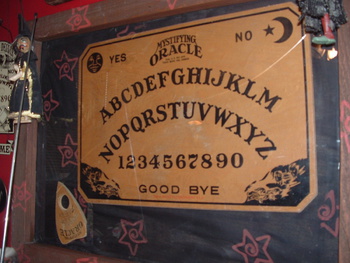 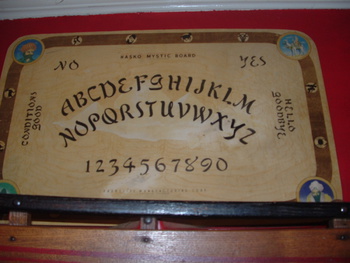 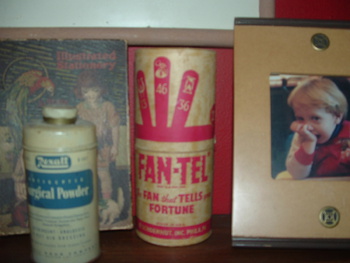 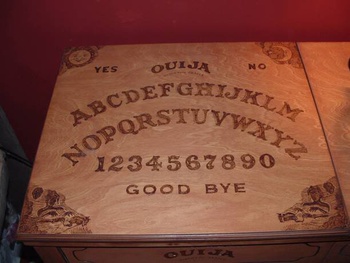 My obsession with Ouija really started when the news came out that Parker Brothers stopped making the old boards, and went to the glow in the dark version. There was a good year or so when you couldn't find them in any store. The talk was they were going to stop making them all together. When they came back it turns out they should of stopped making them, they are of little quality. Even now it's hard to find them in the larger retail stores. It's not that great a loss with their even smaller boards and cheap planchette's.

Of couse we always had one growing up, and they were the center stage at most slumber parties. When a friend of mine showed me just how many different talking boards there were, I wanted them all.

Talking board date back long ago, but when the Fuld family took over in the late 1800's they became a house hold item by the early 1900's. My first old one is the one pictured above that I framed. It took me hours, and just as I finished the glass cracked. Well guess what? I haven't replaced it yet. I just tell people every time I replace it cracks. (I'm a bad liar and no one believes me)

Even the story of William Fuld is interesting. The talk was Fuld got ownership of the company in a hostile takeover. Mr. Fuld liked to brag he invented the Ouija, when of course that is not true; he was just smart enough to slap a patent on it. They had been making talking boards for years, and been in use much longer, the origins dating back centuries in China. Be that as it may Mr. Fuld was smart enough to see the craze of mysticism and knew how to market it. Mr. Fuld also told the tale of the board giving him advice in business dealings. Even his death turned out to be a mystery, and even a bit scandalous.

The second one is a 1940's Hasko talking board. Both sides are the same. I have the tray too, trays is what Hasko was famous for. In my collection I also have the 1946's Parker Brothers one (Okay more then one) in the box. Along with many more. My boxed ones are put up.

The framed one I got off of eBay. The wonderful seller thought I paid too much and sent a 40's version as well. From there I have gone on to other parlor games, then to making my own. Currently I wood burn Ouija's from older sewing machine cabinets. The size is the 1946 version from which I made my stencil of the letters. The picture all the way to the right is one of mine.

Now whenever I find a Ouija board, no matter the age I pick it up. Parker Brothers Ouija's are a growing collectable. The items I picked up 10 years ago have tripled in price.
Be sure to follow this article on my boards and William Fuld
http://www.collectorsweekly.com/articles/the-mysterious-origins-of-ouija-boards/