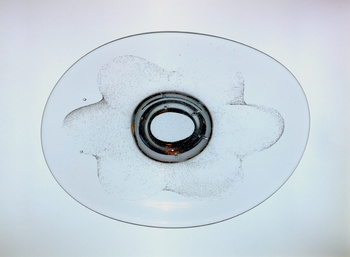 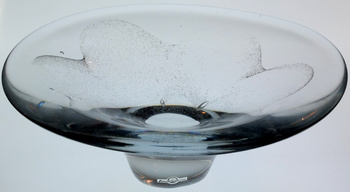 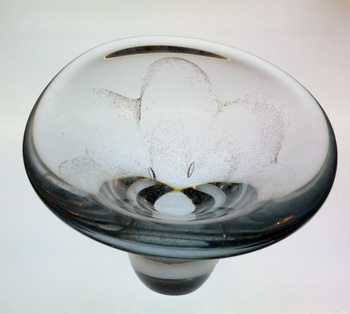 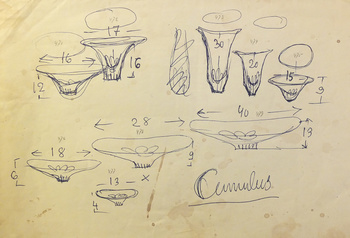 I found one of the glass pieces I have on modernistglass.com :

They wondered what it was all about and who was behind (despite signing "GN 39 SH"). The signing is clear, Gunnar Nylund No 39 Strömbergshyttan. Mine is not signed, but has a Strömberghyttan sticker. I got it from my father and it is made in the same technique as the famous Coquille-glasses from Flygsfors by Paul Kedelv. That is to say not blowing air into the glass, but working from a massive glass ball which is coated with several layers of glass, in Coquille-glass multi color layers between clear glass layers. In this Nylund piece they have also rolled in, or put on cutted transparent adhesive stickers with powder material in some form, that I believe is not silver but something else. Perhaps ordinary glass sand that take time to digest and therefore retains its appearance in the short time the glass is processed before cooling? Another possibility is to roll on a glass ball in the powder and then forming it into a flower (the shape of the pattern), and finally put it in an intermediate layer on top of the ball. Then the pattern of the two layers become as here, with something that looks like the edges folded around? I would tend more to it would be done like that, when I think about it. Otherwise It must be verry difficult to get the two leyers of powder to exactly matching each other.

When the glass finally is formed you press a piece of wood into the top of the glass ball, so that the shape becomes bowl/vase-like and then you can also let the glass fall out of natural forms, or with different tools pull out the desired shape, with multiple warmings .

A drawing from the 1950s, which I think is for these glasses, are also preserved by Gunnar Nylund, with different models. The serie is named "Cumulus". Number series from 471-479 can be working numbers and probably no model number of directories. I don't know if these serie came in production? I miss directories from a lot of Nylund period and waiting to compleate with those from a glass expert I know of, so how it could be with that I can not say now? Test Series will of course also come out on the market, eg Orrefors-Kosta/Boda sells much of their test glass series (even models that not come in production) in the glass shop at Strömbergshyttan each year.

The size of my glass does not match the piece at modernistglass.com and these two are either not consistent with the sizes of the models in the drawing. My has the following dimensions:

But the glass model are designed by Gunnar Nylund in Strömbergshyttan and in the 1950s, that is clear as crystal!