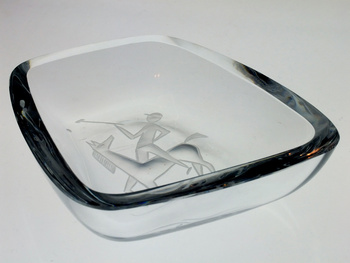 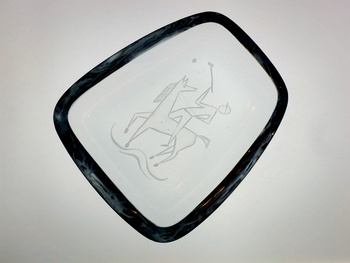 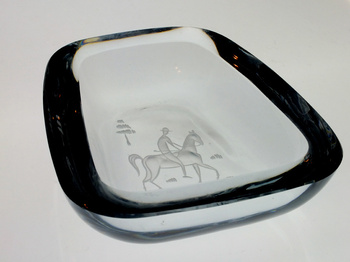 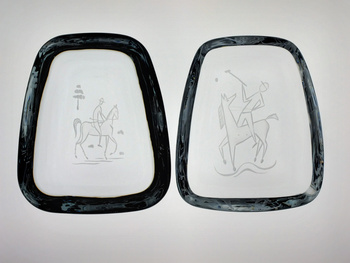 I found these ashtrays/finger bowls at a local garage sale. I paid around 70 sv.kr each (about 10 USD). They are not signed and does not have any stickers, but the same shape (but 10cm instead of 14.5 cm as these) are in the model number H57 in my directory for Strömbergshyttan dated 1972 and ending at number H125. The catalog of 1954 stops at model number H44. So I think this may be a late 50th century composition, and if so, by Gunnar Nylund. Although engraving can be Nylund as it resembles a little style from a plate with similar engraving attributed to him by my father (A22 pattern C477). But it could also be a later dated patterns of these ashtrays? I have not found this form at any of the drawings by Gunnar Nylund that are preserved, but it's lacking a lot in the collection, it should be said, and it seems to be the end of the 1950s, and even drawings from the 1960s that has gap.

What's mystifying is that they are 14.5 cm when the H57 is only in 8 and 10cm in the catalog from 1972, but it might have been several models before? Even that one is thinner makes me confused? May be that the model has been in several thicknesses before, or that there is another model with a thinner shape? I will await the directories from the late 1950's and 1960's, as I'm about to acquire, and (if I can find more information there) come back for it.

But perhaps there is someone else who knows anything about these ashtrays / bowls and can help to solve who is behind the design? My belief is still that it's late 1950's and Gunnar Nylund who's behind the trays/bowls.