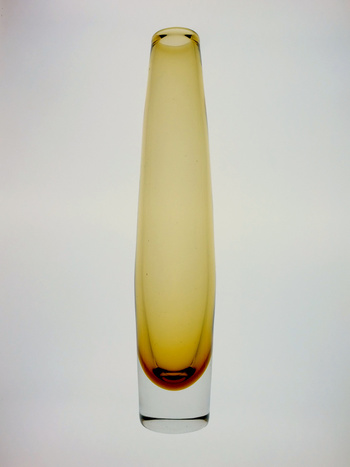 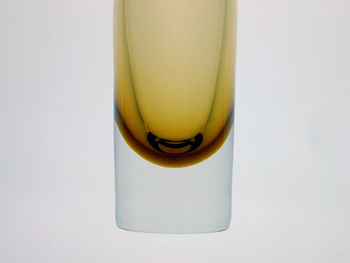 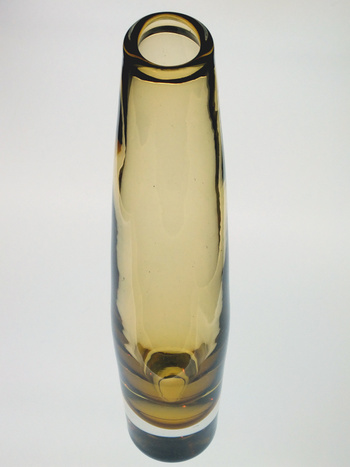 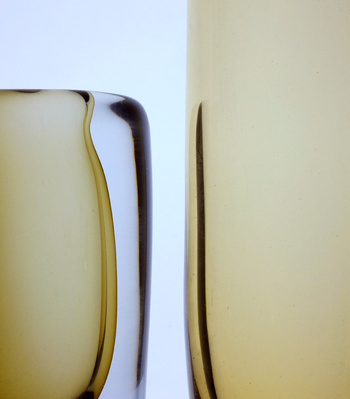 Another one of the vases I bought online on New Year's sale. Unsigned and unknown author. A golden yellow and slender vase that makes me think of Strombergshyttan model B895, called Sputnik and designed by Asta Stromberg (not Gunnar Nylund or Gerda Stromberg what I know). However, the bottom ends higher on B895. Neither the length of this vase match exactly what is listed in Strombergshyttan catalogs for model B895. The vase is there 27cm in length, but this is 26. But I have seen examples of the B895 which was +/- 1cm. In all cases, the bottom line width exactly match to the width specified to B895.

I would think that this vase may be a second-class glass (but it's difficult to say), that also comes out on the market? Something that may indicate it is so, is the golden yellow color. It seems to fit rather well with Strombergshyttans X73 Golden- yellow. In the last picture above:
The left glass - a Strombergshytttan original in color X73 Golden-yellow. The right glass - this vase.
Note that the glass with the original color is slightly thicker, and therfore a little bit darker. Otherwise the same nuance.

I have not found any similar vases in the catalogs I have from Kosta and Orrefors, but probably was similar models made in other glassworks. The fact it's unsigned may still indicate that it could be a second-class B895 from Strombergshyttan? The glass has some air bubbles and dirt, the bottom goes further down and the walls are a bit thinner than the original model. The blower who blew up the glass might have taken too much air (also too little glass) and when the master then drove it out, the walls and the bottom became a little bit thin in comparison to the original? That's my theory. Do you have other information about this vase, I will be pleased.

A thing to mention is that during the short session I worked at Strombergshyttan in the mid- 1970s, was my work including heating in these models of Sputnik vases for master blower Arne Abrahamsson in his foundry team. And therefore I know that all was not perfect, and not a few was probably sold as second-class items in the factory store. I also know that these Sputnik-vases continued in production at Orrefors glassworks after 1979, when Strombergshyttan closed down (Orrefors bought Strombergshyttan in 1976 after bankruptcy, and shut down production there in 1979). So maybe you can find this kind of vase with an Orrefors sticker on, who knows?