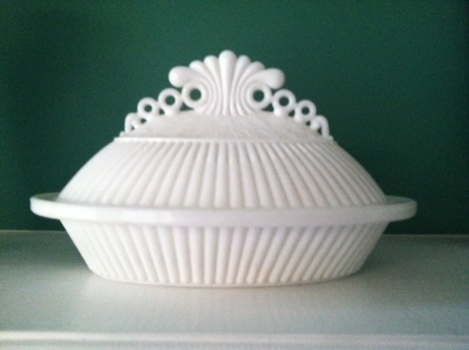 Very rare piece of Atterbury milk glass. Marked on base with patent date of 1888.

'James S. and Thomas B. Atterbury joined brother-in-law James Hale to form Hale and Atterbury in 1860 in Pittsburgh, Pennsylvania. The grandsons of Sarah Atterbury Bakewell (sister of Benjamin Bakewell and founder of Bakewell's Glass Company), opened their White House Factory at Carson and McKee streets in Pittsburgh's South Side. Hale was the firm's glassblower. He was replaced two years later by James Reddick who left Atterbury in 1864. The company's name thus was changed from Hale, Atterbury and Co., to Atterbury, Reddick and Co., then Atterbury and Co. before finally bearing the name Atterbury Glass Co. in 1893. Thomas Atterbury served as the company's president throughout its history.

Thomas Atterbury was the principal inventor in the firm.' (1) 'The Atterbury Company was looked upon as the finest producer of milk glass. All their early pieces were marked with a patent date and the animals all had glass eyes that were glued in. Many of the animal's dishes had lacy edge bases. Extra detail was given to all their molds to create realistic looking animals. The most popular animals included a hen, cat, fox, duck and fish. Atterbury also made many non-animal dishes that collectors are on the search for, such as the hand dish, maple sugar bowls, whiskey bottles and other table pieces. All their pieces are highly sought after by collectors.' (4)

Atterbury and Co. also made a variety of items: canning jars and lids, bar bottles, covered dishes, salt and pepper shakers and other tableware, and lamps. Its covered dishes made out of opal or milk glass often featured animal designs - rabbits, ducks, chicks, bulls and boars heads.(1)

It's most famous designs are its covered dishes, in which the covers were shaped like animals. 'Rabbit' appeared in 1886. 'Duck' in 1887 and the 'Boar's Head' in 1888. The glass menagerie also included dish covers called 'Chick and Eggs', 'Entwined Fish' and 'Hand holding a Bird'.(2)

Along with his brother James, Thomas created one of the finest kerosene lamp producing companies of the late 1800's. They received over 100 patents for glass and lamp design and production. Their lamp patterns were numerous and varied: Chieftain, Prism, Tulip, Icicle, Loop, Fine Rib, Wave are only a few examples. When financial problems hit in the late 1880's Atterbury and Co. joined with several others to form a new single company called the United States Glass Company.(3) "Atterbury remained an independent factory until 1903."(1)