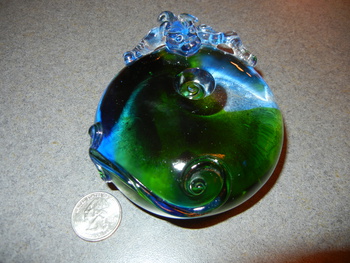 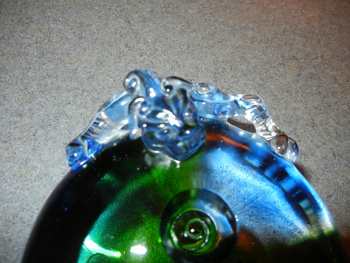 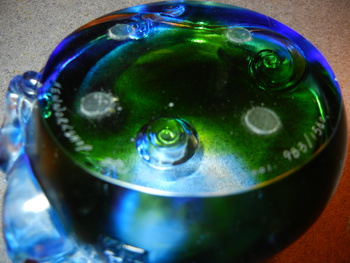 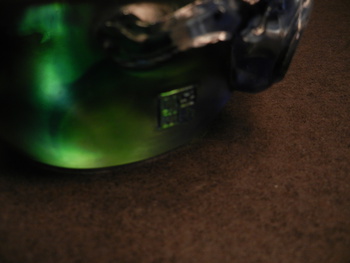 I received this paperweight as a corporate gift during a business trip to China in 2001 or 2002. Unfortunately, I no longer remember where it came from, but it was either Shanghai, Dalian or Hong Kong (the only places I visited back then). I remember it came in a paperboard presentation box with a silk lining with a custom foam impression which the paperweight fit into.

It's about 5" across and only a couple of inches tall. The bottom is etched with "NEWWORKSHOP" with some Chinese characters and then "2001 983/1560" and there is a stamped Chinese character set pressed into the side (sorry, I did my best to get closeups, but they didn't come out very clearly with my auto-focus camera).

I'm not sure exactly how it was made. The bottom has been ground/polished down, so there is no indication of a pontil mark. It's possible it was cast because the tail of the dragon seems almost formed as part of the body of the paperweight - but the arms of the dragon and head are raised/separated from the main piece - you can see the space in the picture - and I see no seams anywhere on the piece which I would have expected had it be cast or blown into a mold. The horns of the dragon also are still relatively sharp, something I don't think a cast piece would have been able to produce.

I've always liked the piece, and indirectly it began what would become my collection of art glass.