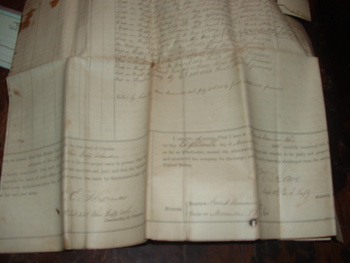 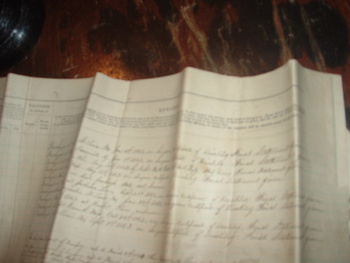 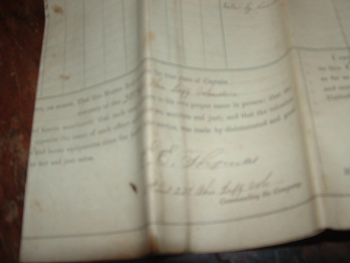 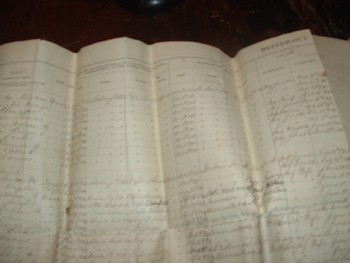 First I want to appologize for the fuzzy pictures and will replace them when my batteries charge. I'm somewhat freaked out I have this. I was going through our family's old papers. It's not odd to find things from the Civil war because we saved everything including all letters, but this?

It's a Muster out report from Camp Dennison dated 1864 signed by a relative. I did a search and the government has the report from 1861-64, but not the 64-67. So now I'm freaking out because I may have the only copy of this report.

I'm not going to unfold it again but take pictures of what I can without doing that. When I first desided to unfold it I grabbed the largest frame I could. It's my habit to frame old documents the first time for fear of making more tears, only this thing is gigantic, and front and back.

I have emailed as many people as I could think of on this document because I'm at a loss of what to do with it now.

I also found a bid for Ohio Govenor signed by John Bricker 1935. Seriously weird. This copy clearly not turned in as the back is not filled out, but it was notorized and signed by both the notory and Mr. Bricker. Why my mother had this? No idea unless John gave it to her himself. So I sent out inquiries about this as well. They need a political and Military catagory here!