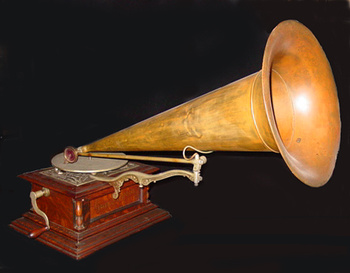 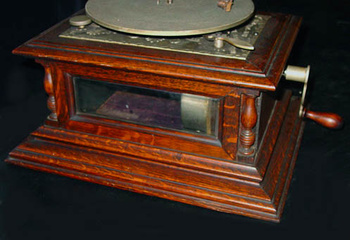 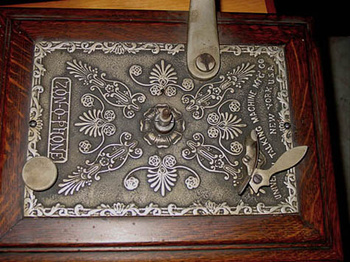 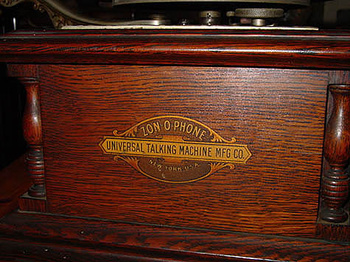 The Universal Talking Machine Mfg. Co. of New York, was founded in 1898 and marketed the Zon-O-Phone, disc (flat) record player, until 1904 when the company was bought out by Victor, as in Victrola.

Made between 1901-1904, until the addition of the Royal Grand model in 1905, this front mount Grand Opera, with glass viewing window on the back, was the TOP OF THE LINE Zonophone for Universal Talking Machine. Said to be able to play five 10” flat disc records with one winding, the table is 9”. The green felt on the table is original with one circular streak from wear by the reproducer. The 30” original brass horn has a few small dings on the cup, a shallow fold above where it lays on the arm, and mottled tarnishing from 50 or so years of non-use, The horn was shiny when my father acquired it. The connector is an original brass elbow. The crank is original.

Equipped with a red metal Mobley reproducer marked patent May 8, 1900. Although not original, the reproducer (needle holder) is contemporary to the machine, and is often found on the Zon-o-phones, since their original head was quite fragile.

The wood is in wonderful condition, a warm rich reddish brown, with faint age-crazing on the finish; decals are intact with good color. Base of machine measures 13” x 16”. The metal platform over which the table sits is embossed with ornate raised lettering and designs; the table turns freely. As with other machines I inherited, I put lemon oil on the wood, and high quality light sewing machine oil on the mechanism inside. According to Reiss, this is given a 4 out of 5* rarity (fairly rare).

This is another one of my father’s phonographs, which were collected in the late 1950’s-early 1960’s. As far as I know, he made no changes or restorations to this machine. Although it turns freely, I haven’t played it in years because I don’t have any metal needles. The needle was inserted into the reproducer and could be used only ONCE! All I have is just a small empty tin which the needles came in (various brands).

Just recently I found the original PAPER label underneath the base. It has printed basic blah blah wording, with a hand-written price of $45 and the manufacturer # 9456, also hand-written. This was exciting for me since I never thought to look underneath!

I lied when I said the Hexaphone was our favorite as kids…well, just a little lie. We loved this old phonograph too. When Pop got it the brass horn was bright and shiny, and of course the glass window in the back allowed us to watch the mechanism work.

I have a photo from 1958 taken in Pop's shop with some of the phonographs owned at that time on another page, same title but with #2.
Look for more detailed photos of this machine there too.