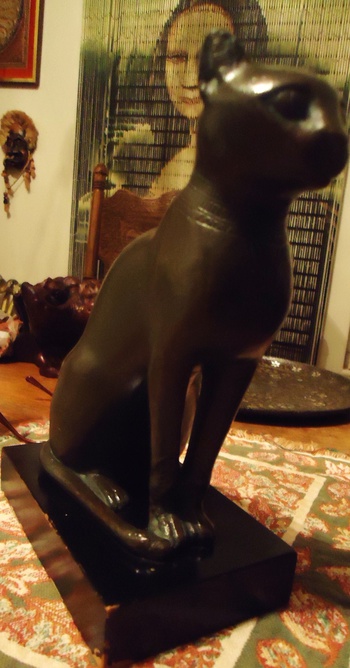 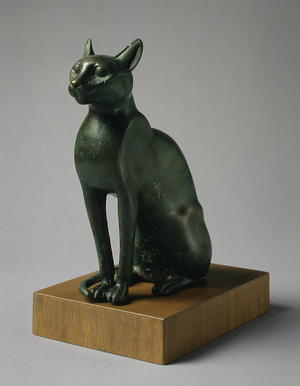 NOT ON VIEW Last Updated April 26, 2013
When fastened together along an almost invisible seam, the two cast halves of this figure became the container for a mummified cat. The cat was the sacred animal of the goddess Bastet. In rituals performed in her honor, mummified cats were buried within her temple precincts. Clearly this is not an ordinary cat. Its pierced right ear once held a gold ring (now lost), and suspended from its incised necklace is a wedjat-eye pendant. An impression of majesty is created by the cat's erect and dignified pose and the alert expression of the eyes. The sleek muscles and long graceful legs convey a sense of controlled power.
For the Egyptians, the goddesses Bastet and Sakhmet were two aspects of divine power. Sakhmet, the lioness, represented dangerous, potentially destructive forces. Bastet, the feline of the house, incorporated the benevolent aspects of a deity that could be pacified by rituals.
Cats were first domesticated by the Egyptians in the Middle Kingdom for their mouse-hunting abilities. By New Kingdom times, they had also become household companions. In tomb scenes, they frequently appear seated beneath the chairs of their owners or on sporting boats in the Nile marshes, where they flush out birds for their. DON