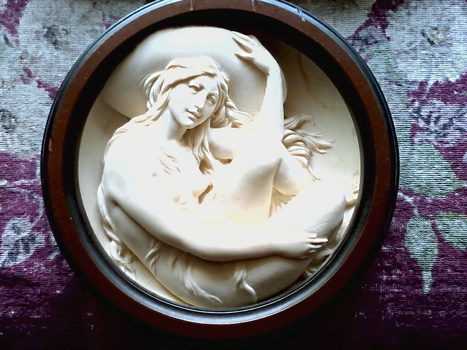 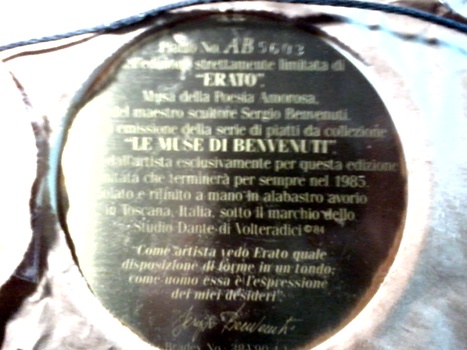 I like the "art deco /nouveau " look of this piece. It's quite heavy and in a custom wood frame which has a couple nice gouges unfortunately.It had paper over the back. When I peeled it back carefully I found the brass plaque (it's all in Italian too !) on the bottom of the plate. It's by the Italian sculptor Sergio Benvenuti and entitled " Le Muse Di Benvenuti" for a series commissioned by the Bradford Exchange in 1985. There were stacks of these framed plates today at Goodwill but only four of the alabaster ones. Someone really spent the money on future collectibles. These never attain any real value. In fact I can buy this new old stock in the box without the fame for 50 bucks on Ebay. So I don't feel bad about paying fifteen for it. It's still a nice decorator piece. Goes well with my Arnaldo Giannelli bust. -Mike-

Sergio Benvenuti was born in Lucca and lives and works in Greve in Chianti (Florence). He was a student of Mario Moschi’s in Lucca and he attended the Fine Arts Academy of Florence. He taught sculpture at the Lyceum of the Academy of Florence and he is a member of the Fine Arts Academy of Florence. When Benvenuti arrived in Florence, Antonio Berti, an official sculptor to the Vatican and to the Royal Family, gave him a formidable training. A sculptor was supposed to be like an athlete – he was to show himself to be strong and capable. In 1956 Sergio Benvenuti worked as an assistant to Antonio Berti on Berti’s monument to Alcide de Gasperi . Benvenuti worked in the theatre and does it assiduously. He produced sets for the “Teatro Comunale” of Florence and for “La Scala” of Milan. He enjoys it. Benvenuti has also done some works for Japan. One of his “Ballerinas” was selected as décor in a large department store in Tokyo and Kyoto. He won awards at exhibitions and competitions and recently he also made international group exhibitions. He also made the “Two ocean fountain” for the city of San Diego and the equestrian monument for the Broncos Stadium in Denver, Colorado.